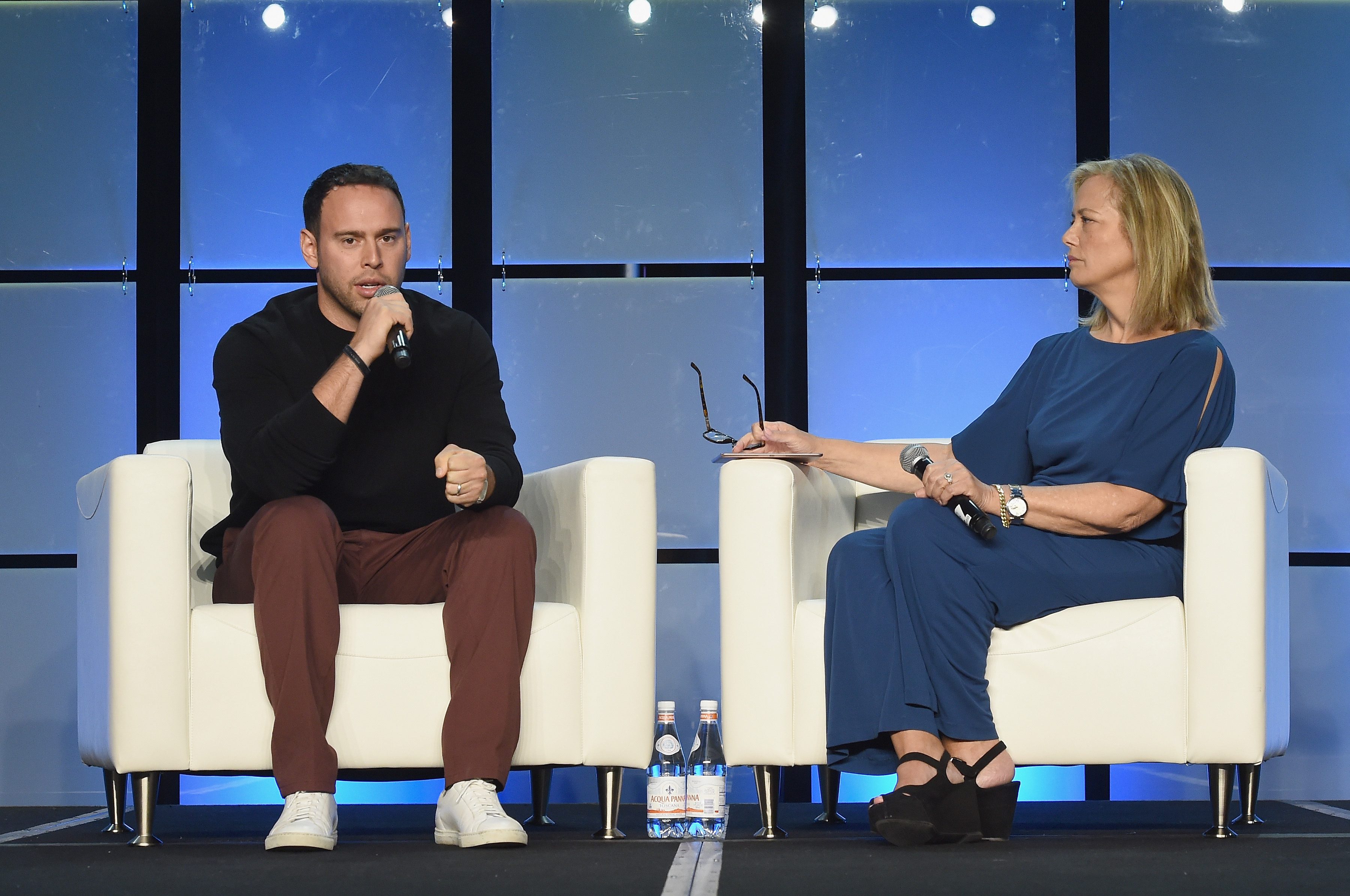 Mega manager Scooter Braun delivered an emboldening speech and keynote address after receiving the Harry Chapin Memorial Humanitarian Award during the 2018 Music Biz seminar in Nashville on Thursday (May 18), calling for Nashville artists to realize their influence.

“I appreciate that One Love Manchester is a part of this [award], but I wish it was something we never had to do,” said Braun of his humanitarian recognition. “Unfortunately, my belief is this won’t be the last time we see something like this—we’ve seen Vegas happen.”

Keynote moderator, CNN’s Hilary Rosen, observed Braun at the March For Our Lives. “I watched how those Parkland kids looked up to you—how they believed they could change the world—and wanted you to show them how,” she said

“What happened in Vegas was horrendous and awful. For everybody in [Nashville] who has the ear of so many people who live in states who can make a difference on this issue.

“Our kids have grown up in a community where shootings in schools are a regular thing—we think it’s new, Columbine happened 20 years ago. If it’s another 20 years…or five years…we’ve failed miserably. Those kids put on the biggest march in U.S. history and not a damn thing has happened.”

Braun hopes for artists to lead the way to help conversations among our polarized soliety begin again.

“We’re in a very interesting time where we people have forgotten how to communicate with each other—either they’re afraid to have the conversation, or they think they have to unfollow people on social media with differing opinions. We as an industry have an opportunity. That conversation has to continue, and come from a place of respect even if you think that person is irrational. Music is the universal language. Encourage the artists you know to take a risk and write songs, maybe the label won’t understand, so we can get back to speaking to each other through music. That evil is going to continue to exist, and we as an industry have a responsibility to those we lost by doing this work.

“Especially in [Nashville], I know a lot of artists are afraid to come out and have this conversation. If you really want to be historic, understand these kids are 20 years away from being the next leaders and they’re going to change it. It is just a matter of time. If you want to be on the right side of history, help them. They don’t want to take away guns. They just want to make it so someone who isn’t qualified cant get them.”

Citing music’s influence on changing opinions during the Vietnam War, Civil Rights movement or even raising awareness for poverty, Rosen and Braun advanced the discussion towards Nashville.

“[Nashville] can make a difference. There are a lot of people I know in this town that were nervous to do something after Las Vegas. I get it. You’re trying to feed your families and it’s a scary thing. Go down to Belmont and talk to these kids and ask them what they’re going to do in 20 years. If you listen to the kids, you might find the bravery to do something. It used to be AIDS, homophobia. Our kids shouldn’t be afraid in school.

“What I’m asking is for the entire community to step up and say something, and make it very clear: It’s not about taking away guns. It’s about making sure someone with a gun in their hand understands what is in their hand. It’s not mutually exclusive, but mental health is a part of this issue. I know what the naysayers are going to say, I was with Emma González yesterday. She’s a sweetheart. Her friend is dead. Cameron [Kasky]’s dad is a cop. He grew up with guns. These kids in Chicago and neighborhoods around this country—what they’re going through—it just needs to stop and we need to make an effort.”

Braun explained the responsibility he felt after Ariana Grande’s concert in Manchester to combat evil.

“I am the grandson of two Holocaust survivors,” said Braun. “My grandmother was in Auschwitz and my grandfather was in Dachau. I understood this kind of evil exists pretty much my entire life. When Manchester happened, I wasn’t sad. I was angry—I was like, these motherf*&^%$! came at the wrong one…That someone would wait for children [and] make that decision to take their lives, none of us will ever understand. They wanted families to be afraid to bring their child to a concert. I wanted to go immediately and do an event to let them know we’re not afraid, because if they can’t change our way of life, it’s pointless for them to try. I talked to [Ariana] about the idea and she couldn’t stop crying. What I asked was unfair and unreasonable. So I let it go. But when I landed home from seeing her, I had 16 text messages saying, ‘If I don’t do something, these people died in vain and I’m not who I claim to be.’ We came up with One Love Manchester within two weeks of the attack. The night before our show was the London Bridge attack. That was the first time I thought my arrogance was going to get someone killed. The Greater Manchester police issued a statement saying, ‘The show will go on, but the terror level is high, so there is likely going to be an attack.’ I never admitted to anyone I was scared but within an hour of the news of London coming out Chris Martin from Coldplay, Katy Perry, Miley and all those performing called to say, ‘We’re still coming.’

Braun explained where his strength comes from in speaking out.

“At 36 years old I’ve had a very unique and lucky career. I’ve been to the top of a mountain I never thought I’d get to. And what I saw there was very different than what I expected. I thought being a part of Grammys, No. 1 records and tours would feel like success. I can tell you the greatest moments of my career has been hanging out with friends and family and being a part of just music. I tell artists, ‘If you have a tremendous amount of success and don’t give away blessings when you receive them, it’s like a glass of water getting filled. If you don’t pour it in other glasses it’s going to overflow and you’re going to feel miserable.

“My strategy is to do what you can. There were 20 families who have someone who isn’t coming home, and there are alot more kids who are maimed, burned or injured whose lives are changed forever. People ask me where I get the strength, and when you meet those families and look them in the eye, you don’t have a choice.

“In this business especially, we need to do it as a community. The next person has to step up, and the next person. After we did Manchester, Ron Laffitte and Coran Capshaw put on an amazing event in Charlottesville that they deserve to be honored for…I’m looking at Clint [Higham] in the audience, the work he and Kenny Chesney have done for the work for the community in the islands…Justin Bieber has taken a lot of flack but he is 24-years-old and he is the No. 1 Make A Wish giver in our industry and he never advertised it once. People want to give back, they may not necessarily know how to…You just have to find something you’re passionate about.”

The talk ended with Braun showing Nashville is not alone. He asked the audience to stand if they were in agreement with serious background checks. This writer saw nobody seated.