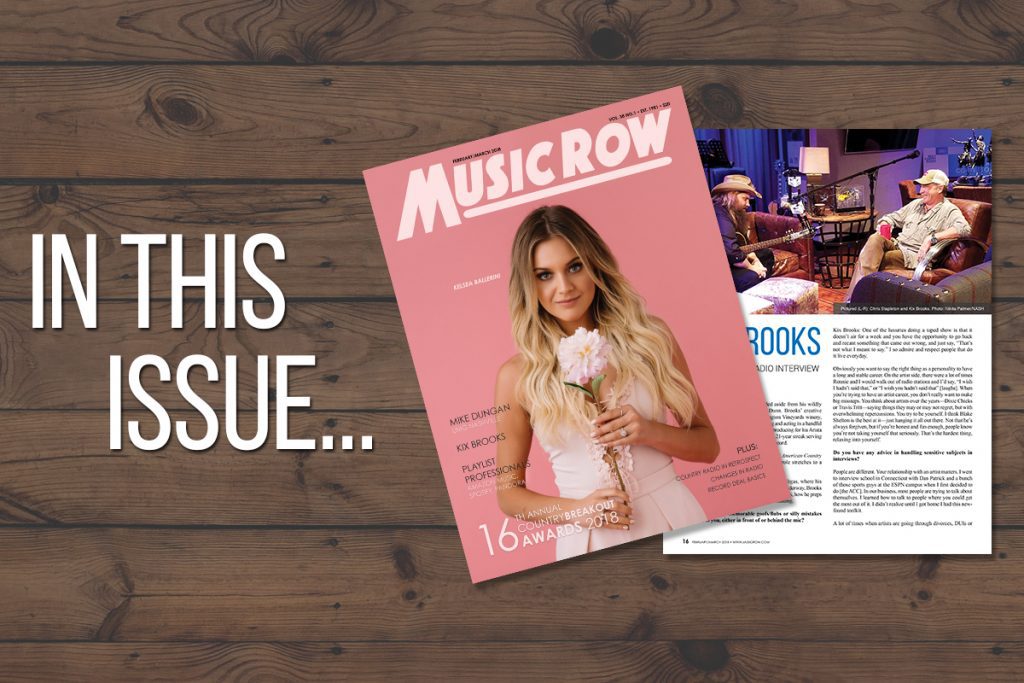 Kix Brooks talked with MusicRow in the latest CountryBreakout Awards print magazine about the art of a radio interview, and having been on the other side of the microphone interviewing guests on his American Country Countdown radio show for 10 years. In this bonus web feature, Brooks touches on the confusion of the Brooks & Dunn retirement, then their return five years later for a residency in Las Vegas’ prestigious Caesars Palace. Brooks also recalls a few memorable pranks from on the road and if any are in store for Las Vegas.

To read the full interview with Brooks, pick up a copy of the MusicRow CountryBreakout Awards print magazine, or subscribe to receive your copy.

There were rumors the reason Brooks & Dunn retired in 2010 was because you and Ronnie disliked each other. But you appeared on his solo album and you still vacation together. Could you explain the decision to part, then reunite in Las Vegas after five years?

The rumor Ronnie and I didn’t like each other is definitely not true. Basically we were offered a record deal without ever even having met. Our first four singles went No. 1. It happened so fast, we wanted to take advantage of it, but at the same time we didn’t have a chance to come up with any personal dynamic. I was 36, Ronnie was going on 40 years old when we met. I can’t think of another case in music—I mean I don’t know any other acts where that kind of thing has happened to them. It’s fun to talk to Florida Georgia Line, because they have had that same meteoric rise getting started, but they were two buddies that wanted to do it. Ronnie and I thought the idea was absurd from the beginning. But, like songwriters do, when Tim DuBois said, ‘Do me a favor and see if you can write a song together,’ we did. The next thing we were off to the races. We kept working it to keep this thing going. As a duo there was always a certain amount of compromise that came with making records, etc. Ronnie evolved as a dynamic singer. For me, did I really want to be a side guy playing guitar? I had always had bands growing up. Obviously from a success standpoint it was extremely rewarding, but at some point it comes with so many compromises you step back to question, what am I really doing here?

The break offered a time to professionally get away from each other to re-evolve where we were as artists, people and musicians. We both went out and performed and got our thing back as individuals. I don’t think we had much intention of doing Brooks & Dunn again, because we had gone as far and high as we expected to go. After some time apart when Caesars came to us asking if we would like to do the residency, and especially with our dear friend and big sister Reba, we were like, “You know what? It would be fun to sing these songs again.” We enjoy about an hour in the dressing room each night, kinda talking over stuff and Ronnie and I are going duck hunting right after the first of the year. It’s not like we don’t want to hang out with each other. It took five years off for us to find the fun spot, musically and professionally again.

You put out a solo album in 2012 [New To This Town] with Arista Nashville. Looking back, was it freeing to creatively explore or did you hear Ronnie’s voice in your head with advice he might have offered?

I just got back to doing what I did. I wrote with a lot of my old buddies. It’s fun to be uninhibited, uncompromised. I wrote a bunch of stuff and went in and produced and recorded it myself. Of course you’ve always got a record company involved but I had one that did like it and believed in it. I’m sure Ronnie felt the same way trying to make Brooks & Dunn music, something that says what two guys together would say with fun and games. It wasn’t that Brooks & Dunn never did personal love songs, but that’s the challenge for duos, whether it’s two guys or two girls or whatever.

Ronnie and I are both at a point in our career where you have to be careful with how much you expect for radio to play. And it’s not just us, that’s the case with Reba, George Strait, Alan Jackson, etc. We’ve had our run at radio and there are a lot of great new artists who are getting their shot now. That’s the way of the world and at some point you have to find joy in the success you’ve had and find a new place as a performer and artist you have to accept time marches on. Just like we did, new artists are going to take a shot and there’s gotta be room for them.

How has the Together In Vegas show evolved and what have you learned with the Las Vegas residency?

The set list has changed a little bit. We’ve thrown in a couple Christmas songs over the holiday, which we’ve never done before. But the staples are gonna be there—they want “My Maria,” “Fancy,” “Night The Lights Went Out In Georgia” and “Boot Scootin’ Boogie.” For us, the trick is to keep it fresh and at the same time we tend to go off on so many tangents we have to learn where to reel it in.

Now we’re not sweatin’, we know the songs are there so we’re having a lot of fun with each other.

We get out there and get lost if people are having fun. It’s become so comfortable and Reba is a great responder. Ronnie and I are loose enough that we’re liable to say anything. Just the way Reba gets mad on stage is really funny. I can understand why her TV show did so well for so many years. She’s just got great looks. She has an ability to get out on stage with us and make people laugh.

Brooks & Dunn were known for epic road pranks. Have you pulled any pranks in Las Vegas? Do any stand out over the years?

Knowing we’re going to be in Las Vegas all the time, we prefer not to live in fear. No pranks have gone on in Vegas.

But Ronnie and I honestly never started anything on the road all those years. We’re just really big finishers. Once we sorta got a reputation, we would always tell opening acts, “Don’t start it and there won’t be any, let’s just have a fun tour. But if you start doing stuff, really bad things could happen to you.” We’ve put a hardcore military stink bomb in Reba’s road case. And with Jo Dee Messina, CMT filmed it after she put a bunch of balloons filled with glitter on Ronnie’s bus. I rented this hot air balloon because I knew she was deathly afraid of heights. We grabbed Jo Dee after sound check one day and she saw that balloon inflated and just lost her mind. We’re 30 feet in the air and she was still trying to get out. After Faith Hill put salt water in Wade Hayes’ drinking water and he got so sick when she was opening for Ronnie and I, I bought this eel without a head at a truck stop. We thawed it out and put that in her bed, down where her feet would go when we were in Canada. She never actually commented on it, but when we went back through customs, the agent started putting on gloves saying there was apparently some jewelry missing and I would have to be examined to make sure it wasn’t hidden anywhere [laughs].