Passes will go on sale Feb. 9 at 10 a.m. EST at fasterhorsesfestival.com. Jason Aldean is releasing a brand new single Friday (Jan. 26), “You Make It Easy,” from his upcoming new album, Rearview Town, which is due out April 13 on Broken Bow Records. He’ll debut the new song next week on both The Tonight Show Starring Jimmy Fallon on Monday (Jan. 29) and TODAY on Tuesday (Jan. 30).

“Growing up in Macon, Georgia, I had a chance to learn about so many different styles of music,” Aldean explains. “Looking back on first playing in bands as a teenager, I was just soaking everything up. A lot of that comes out on this record…where I’ve been, and who I am now.”

The latest project follows his last three albums, which each bowed at No. 1 on the Billboard 200 albums chart. All seven of Aldean’s previous albums have achieved Platinum or Multiplatinum status, tallying more than 15 million in total album sales and 19 No. 1 hits.

Aldean will be taking the new music to fans all across the country this Spring and Summer when he kicks off his just-announced 34-city High Noon Neon Tour, which will hit Atlanta, Dallas, Cleveland, Philadelphia, Toronto, Sacramento, and more through the end of September. Don McLean was recently honored with two awards from BMI, recognizing his long-standing career and outstanding contributions to the music industry through the iconic hits “American Pie” and “Vincent (Starry, Starry Night).” Among the honors he received were five million certified airplays for “American Pie” and three million certified airplays for “Vincent (Starry, Starry Night).”

Don was presented with his Million-Air certifications at the BMI offices in Nashville, Tennessee and accepted the coveted awards from BMI executives Jody Williams, (VP, Creative) and Mason Hunter (Assistant VP, Creative). A Million-Air Award is given to songwriters, composers, and publishers whose songs accumulate over one million U.S. broadcast performances. The acknowledgement is a mark of praise. The two tracks honored, played back-to-back, would total nearly 56 years of continuous airplay. Warner Music Nashville Chairman & CEO John Esposito hosted the inaugural installment of his new quarterly event series #LiveFromEspo’s last night at his home in Nashville. WMN executives and industry leaders came together to enjoy a 30-minute set from upcoming CRS New Faces artist Michael Ray, who treated the intimate crowd to a preview of his new album, due later this spring. Florida Georgia Line celebrates eight weeks running atop the Billboard Hot Country Songs chart for their collaboration “Meant to Be” with Bebe Rexha. The group was joined by their BMLG Records and Big Loud management family following a performance yesterday on The Tonight Show Starring Jimmy Fallon. Michael W. Smith will launch the first leg of his Surrounded By A Million Lights World Tour on March 8 in Rochester, Minnesota. The tour will visit 18-plus cities through mid-May before wrapping in Lancaster, Pennsylvania.

Smith’s tour will feature performances from his two upcoming albums, including the studio album A Million Lights (releasing Feb. 16) and the live worship album Surrounded (Feb. 23).

Tickets for the Surrounded By A Million Lights World Tour go on sale Jan. 31 in most markets along with special VIP packages featuring early entry (for general admission shows) or premium seating (for reserved shows) and a Q&A session with Michael. The event will provide fans a unique opportunity to take in live performances from the hottest new talent in country music, while artists compete in a tournament of golf skills. Fans can reserve premium Topgolf bays with stage views, food and beverage, and compete in their own competition to win various prizes, including an artist meet & greet. For non-golfers, general admission tickets are available for fans to hangout and enjoy the show. Performers will be announced in the coming weeks.

The ACM Lifting Lives Topgolf Tee-Off is part of the 6th Annual ACM Party for a Cause® festivities set to take over the Las Vegas Strip April 12-15, 2018 leading up to and immediately following the 53rd Academy of Country Music Awards™, Country Music’s Party of the Year®, which will broadcast LIVE from MGM Grand Garden Arena in Las Vegas on Sunday, April 15, 2018 at 8:00 PM ET/delayed PT on the CBS Television Network. Craig Morgan and his family will be the center of a new series on UP TV, Morgan Family Strong, which will premiere March 1 on the network. The series will follow Morgan and his close-knit family, wife Karen, daughter Alexandra, and sons Kyle and Wyatt, at home and on tour as they come together following the loss of their son and brother, Jerry, in a tragic accident. Part of the family’s healing process has been to launch a passion project, titled Morgan Farms.

This season on Morgan Family Strong, viewers will see the Morgans juggling life at home and on the road including opening a family store, The Gallery at Morgan Farms, and Craig writing new songs for an upcoming album. The family will also explore the Alaskan wilderness on vacation, take the stage at the Grand Ole Opry, and celebrate birthdays and other milestones along the way.

“Craig and his family are so genuine, real and authentic that we immediately fell in love with them and knew that their story was a perfect fit for UP and our viewers,” said Timothy Kuryak, SVP unscripted development and production, UP. “They are such a fun and loving family, yet in the face of a terrible tragedy, they have turned to one another and grown stronger.”

In 2017 Morgan debuted The Gallery at Morgan Farms, a family-owned and operated farm-to-home business in his hometown of Dickson, Tennessee. The store features a variety of artisan items handmade by Craig and his family and shoppers can also order his custom blended Old Tattoo Cabernet Sauvignon, in partnership with Lot18.com. 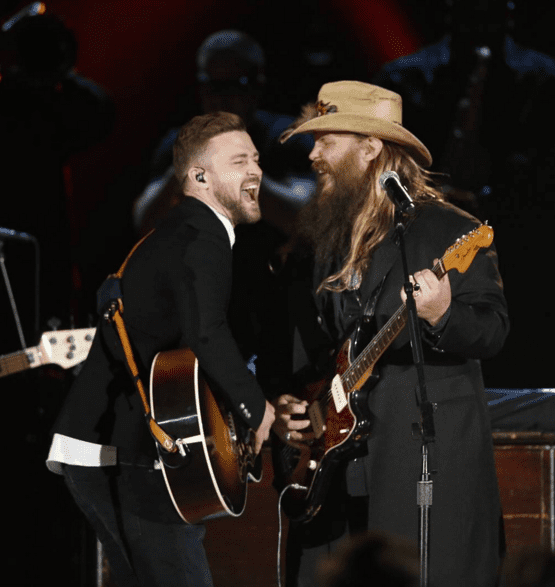 Justin Timberlake teased that country star Chris Stapleton will be featured on Timberlake’s upcoming album, Man Of The Woods and on Thursday (Jan. 25), the pair confirmed the appearance with the release the official video for the track “Say Something.” The song—reportedly co-written by Stapleton, Timberlake, Larrance Dopson, James Fauntleroy, Floyd Nathaniel Hills and Timothy Mosley—is the third track previewed from the album, following “Filthy” and “Supplies.” The video, directed by Arturo Perez Jr., is a one-take video, with live vocals including a multi-tiered chorus appearance at one point. An album version of the track is available on streaming partners and digital stores.

Timberlake and Stapleton previously teamed up during the 2015 CMA Awards for a mashup of “Tennessee Whiskey” and “Drink You Away.” Stapleton also appeared during Timberlake’s set at  last year’s Pilgrimage Music Festival in Franklin, Tennessee.

Watch the video for “Say Something” below: Get set to play the dickens out of the new platters by Maren Morris and Ashley McBryde. They are sharing the Disc of the Day prize.

Cash Creek, Locash and Zac Brown continue their winning ways, so pay heed to those releases as well.

CASH CREEK/Make Your Mama Proud
Writers: none listed; Producers: none listed; Publishers: none listed; Heartland
– Jaunty, light-hearted and highly enjoyable. The message is a winner, too: Don’t try to be what you’re not or chase after what’s not important. Just be yourself, shine in your own space and live with honor. Love it.

KID ROCK/American Rock ‘n’ Roll
Writers: none listed; Producer: none listed; Publishers: none listed; BMG (download)
– I dislike pretty much everything about this artist. His rapping. His looks. His attitude. His genre hopping. And today, his singing this bogus anthem.

AARON WATSON/Run Wild Horses
Writers: none listed; Producers: Aaron Watson/Marshall Altman; Publishers: none listed; Big Label (track)
– This atmospheric, steady thumper has very groovy guitar licks. The lyric compares the rush of romantic passion with an out-of-control mustang. Watson is a highly successful, d.i.y. artist with a dozen albums and a string of sold-out concerts. This nicely produced track is drawn from his 2017 CD Vaquero.

ZAC BROWN & SIR ROSEVELT/It Goes On
Writers: none listed; Producer: none listed; Publishers: none listed
-This is from the soundtrack of the Chris Hemsworth movie 12 Strong. But it stands on its own as a soaring sentiment about enduring devotion. The orchestral accompaniment as it builds in intensity is superbly arranged. Sir Rosevelt is a trio that is Zac’s side project, but he will also continue to make music with his band.

TYLER WILLIAMS/Good For Me
Writers: none listed; Producers: Jonathan Roye; Publishers: none listed; Eight Seven (track)
– This guy is a champion NASCAR driver who sings in a solid, confident way about weathering a failed relationship. The swirling track supports him at every turn. Williams is also a motivational speaker and the author of an inspirational-style book titled I Have a Voice.

MAREN MORRIS/Rich
Writers: Maren Morris/Jessie Jo Dillon/Laura Veltz; Producers: busbee/Maren Morris; Publishers: none listed, BMI; Columbia Nashville
– This bopping tune has been delighting her audiences for months. Feisty and frothy, it’s about a no-good guy she keeps returning to. If she had a dollar for every time she was right about what a bum he is……

GREG HUDIK/She Loves Kissing Girls
Writers: Hudik; Producer: Hudik; Publishers: none listed; Platinum
– His vocal has a muffled audio quality and is somewhat buried in the mix. Which is probably okay, since he doesn’t sing all that well to start with.

ASHLEY McBRYDE/American Scandal
Writers: none listed; Producer: none listed; Publishers: none listed; Warner Bros.
– She sings the fire outta this. The song is torrid enough with its lyric of forbidden love (”love me like Kennedy and Monroe”). Her performance of it burns the house down. I absolutely cannot wait for the album by my newcomer-of-the-year.

LINDI ORTEGA/The Comeback Kid
Writers: Ortega/Skylar Wilson; Producer: Skylar Wilson; Publishers: Last Gang/Ole Media Management/Catpad, SOCAN/SESAC; Shadowbox (track)
– I am a fan of this quirky Canadian singer-songwriter. On this oddball ballad, she sings in a wispy soprano in an echo chamber. The haunting lyric seems to be about someone who was killed, but didn’t really die or somehow returned from beyond the grave. It is the lead single from her CD titled Liberty, due in six weeks.

LOCASH/Don’t Get Better Than That
Writers: none listed; Producer: none listed; Publishers: none listed; Reviver (download)
– It has a certain nervous energy that is infectious. The double-time rhythm track is the star here, but the top-down, head-to-the-sky, soaring vocals will grab ya, too. dick clark productions has named Patrick Menton Vice President of Talent & Production for the company. In his new role, Menton will oversee talent logistics and continue to further develop relationships with key talent management and record labels for the company’s roster of shows including the American Music Awards, Billboard Music Awards, the Academy of Country Music Awards and a variety of other properties.

“Patrick brings more than 15 years of expertise in music, television and events, which makes him the perfect candidate for this role,” said Thurlow. “As the entertainment business continues to evolve, his perspective and innovative ideas align perfectly with the growth of dcp. We are thrilled to have him join the team.”

“I am honored to work for a company with such legendary archives,” said Menton. “These were the shows that I watched as a child that first ignited my dream to be a part of this business. I am thrilled to be joining the dcp family!”