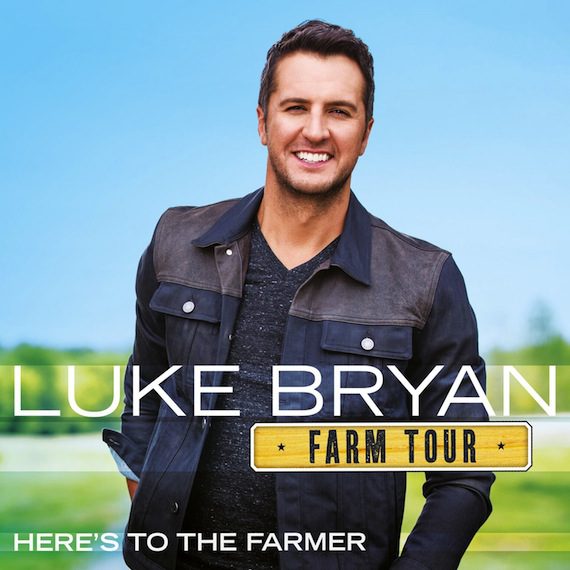 Luke Bryan will release an EP of all new music titled Farm Tour…Here’s to the Farmer on Sept. 23.

Although the upcoming shows will mark the entertainer’s eighth annual Farm Tour, this is the first time Bryan has released a Farm Tour EP.

Tickets for the Farm Tour 2016, which is presented by Bayer, go on sale to the general public on Friday (June 24).

During last year’s tour, Bryan performed for over 110,000 fans during the eight-city run. A portion of the ticket proceeds are granted for local college scholarships to students from a farming family or a student that is an agriculture major within the communities the tour plays. Additionally, Bryan and Bayer make a presentation to a local farmer onstage in each city of the Farm Tour. 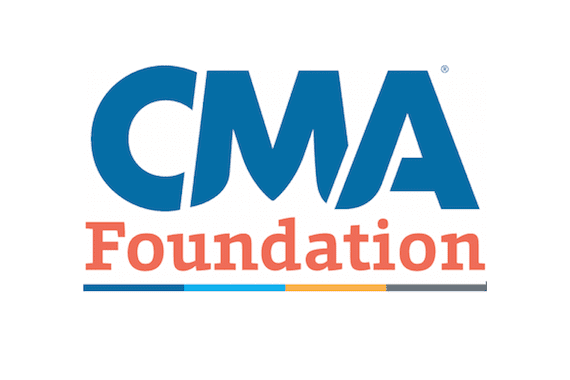 Representatives for the CMA Foundation will include: Sarah Trahern, CMA Chief Executive Officer; Joe Galante, CMA Foundation Chairman and CMA Board Member; and Jennie Smythe, CMA Board Member. The organizations will advocate for complete, high-quality music programs for all students as part of NafME’s annual “Hill Day” for music education.

The day’s events will begin at Hart Senate Office Building for a short morning briefing, during which Bush and Worsham will offer remarks, and an awards ceremony, honoring Senator Lamar Alexander (TN) for his work on behalf of music education.

CMA created the nonprofit (501C3) CMA Foundation in 2011 as the charitable giving arm of CMA. Funds for the Foundation are provided by CMA on behalf of the hundreds of artists who perform and make appearances during CMA Music Festival for free. 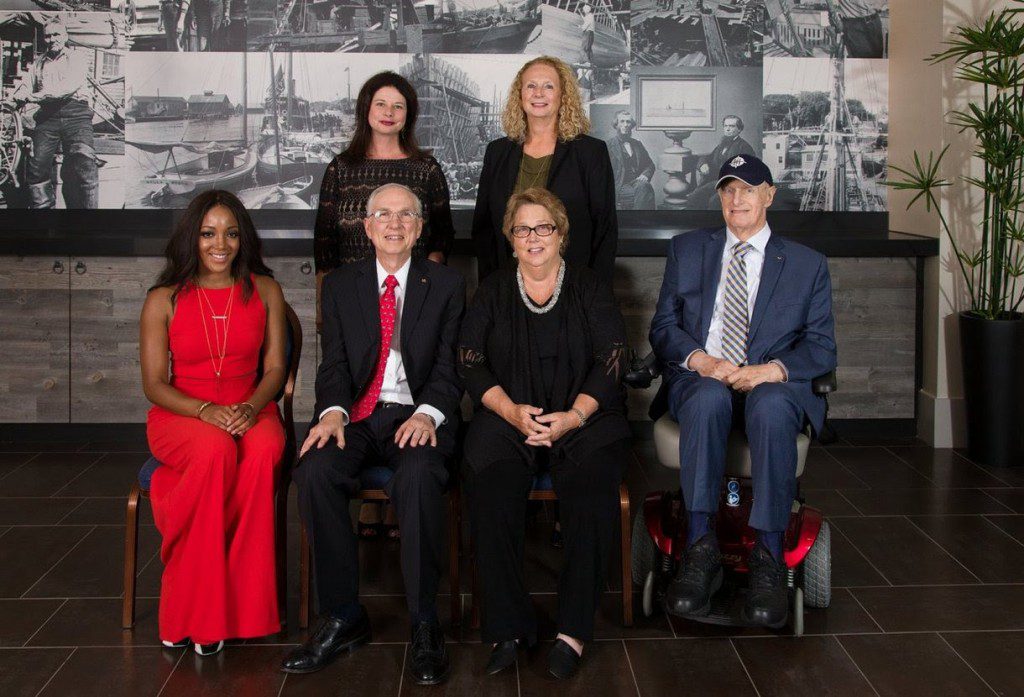 BMI presented a special performance by Capitol Recording artist and BMI singer-songwriter Mickey Guyton at the 32nd annual Hall Communications Awards Banquet held Saturday, June 4 at the Hilton Hotel in Mystic, Connecticut. Guyton performed a number of songs including “Better Than You Left Me,” from her self-titled debut EP, as well as her newest single, “Heartbreak Song,” which was released to radio June 3. Hall Communications, Inc. is a family owned company which operates 21 AM and FM radio stations in Florida, the Mid-Atlantic and New England states. 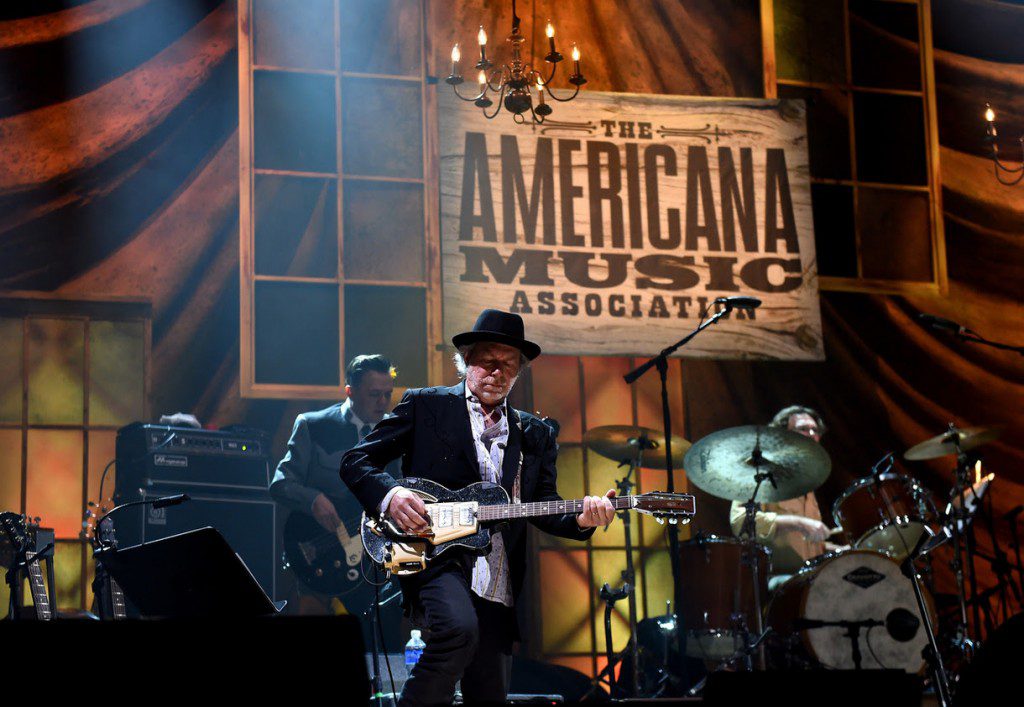 Buddy Miller is set to return to lead the Americana All-Star House Band for the upcoming Americana Honors & Awards ceremony, which will take place Sept. 21 at Nashville’s Ryman Auditorium. The all-star band will include Dave Cobb, Stuart Duncan, Fred Eltringham, Matt Rollings, Don Was, and The McCrary Sisters to play alongside those nominated for awards this year. 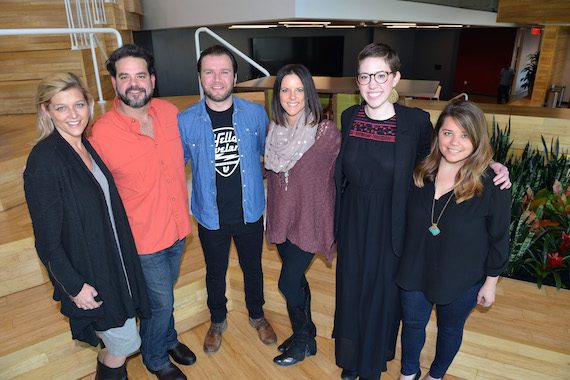 SESAC-affiliated artist/songwriter Matt Willis has signed with Diamond Eye Music for publishing representation. Willis moved to Nashville from Navarre, Ohio, in 2008 to pursue a full-time career in songwriting. His song “Backseat Driver” was recorded by William Michael Morgan for the singer’s debut on Warner Bros. Records. 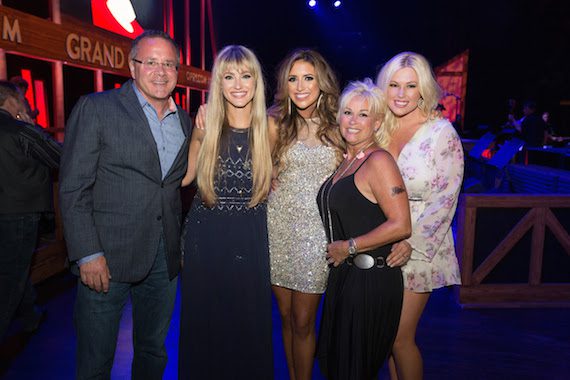 Kenny Chesney Spreads The Love to 41,000 Fans In Milwaukee 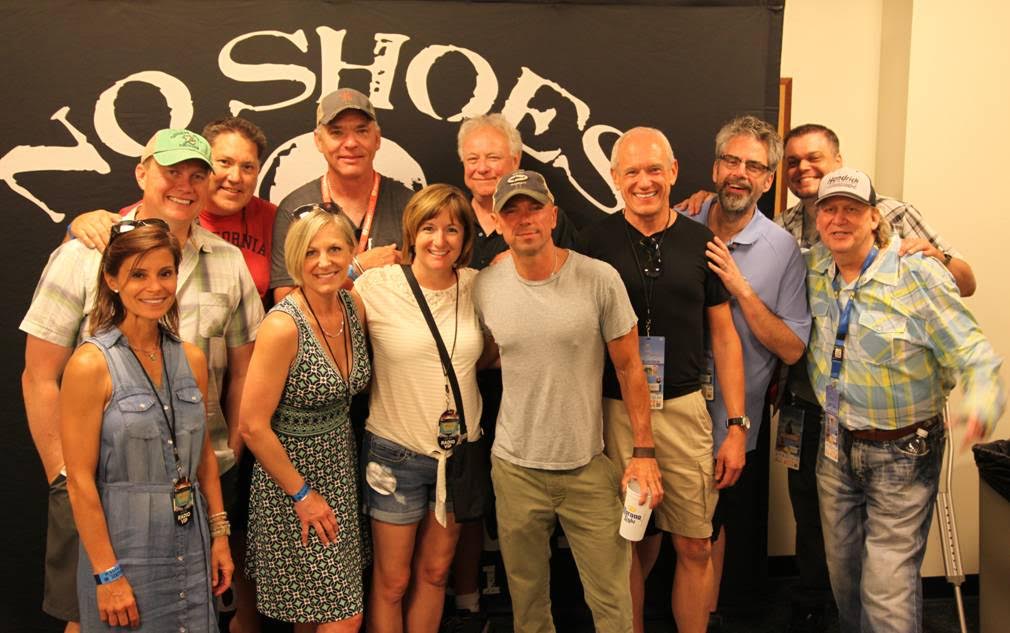 Kenny Chesney’s 14-stadium Spread the Love Tour continues spreading the records. Chesney brought his music to Milwaukee’s Miller Park with 41,342 members of the No Shoes Nation in attendance for Chesney’s show with Miranda Lambert, Little Big Town and Old Dominion. 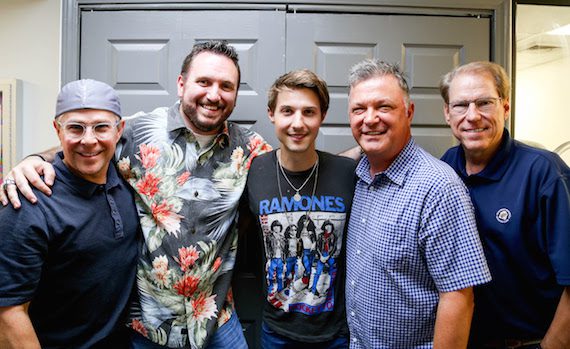 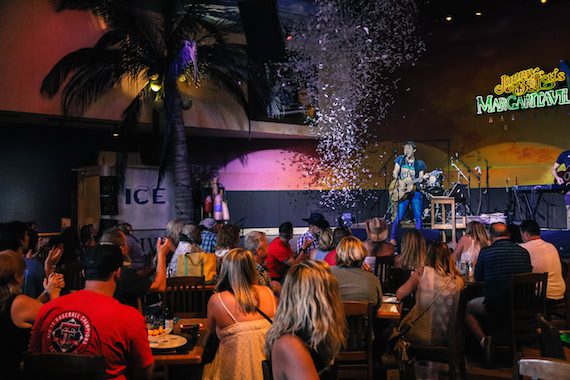 Ryan Follese getting the weekend started while performing “Float Your Boat” for the Music Row Happy Hour crowd on SiriusXM’s The Highway. 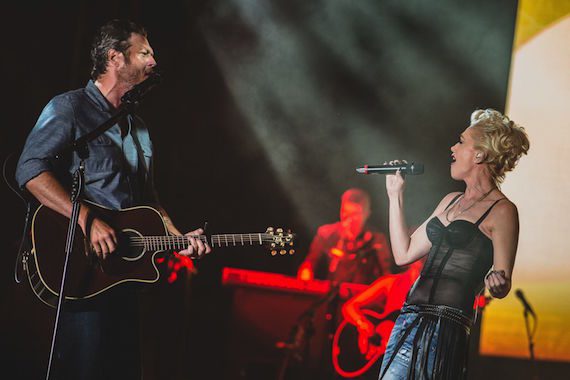 Blake Shelton celebrated his 40th birthday with a performance at the 25th Anniversary Country Jam. During his two-hour set, he welcomed pop artist Gwen Stefani to perform their song “Go Ahead and Break My Heart,” featured on Shelton’s If I’m Honest album. 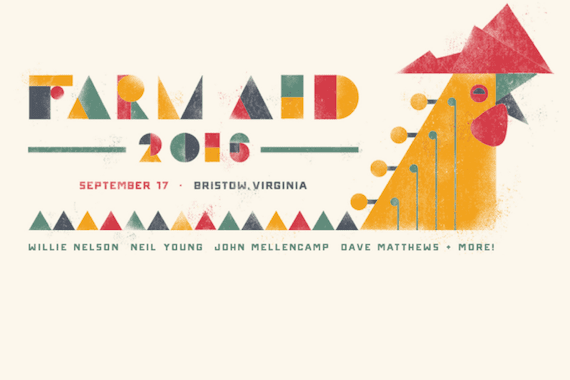 Nathaniel Rateliff & the Night Sweats, Jamey Johnson, Margo Price, Lukas Nelson & Promise of the Real, Carlene Carter and Insects vs Robots are also on the bill.

Tickets go on sale to the public on Monday (June 27).

“Folks are educating themselves about where and how food is grown—they’re hungry for the truth,” said Farm Aid President and Founder Willie Nelson. “Family farmers bring us good food, protect our soil and water, and strengthen our country. The Farm Aid concert is a day for us to honor that truth and keep working for family farmers.”

“Music and food have an incredible power to bring people together,” said Farm Aid executive director Carolyn Mugar. “Farm Aid is a day that illustrates the diversity and strength of the Good Food Movement. At Farm Aid 2016, we’ll join forces and raise our voices for a farm and food system that is good for people and communities, not just for the profits of a few.”

Since 1985, Farm Aid, with the support of the artists who contribute their performances each year, has raised more than $50 million to support programs that help farmers thrive, expand the reach of the Good Food Movement, take action to change the dominant system of industrial agriculture and promote food from family farms. 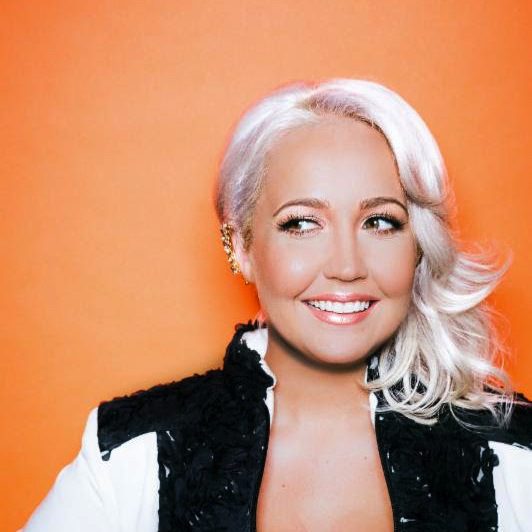 Meghan Linsey, formerly of the duo Steel Magnolia and a contestant on The Voice, has signed with artist management company Pennington Entertainment.

“Meghan’s uniquely powerful, soulful, and distinctive voice have put her in a class all her own,” says Pennington. “There is incredible new music on the horizon and a soon-to-be announced opportunity that will highlight her amazing talents and extend her brand into a whole new space! Our team is honored that she chose Pennington Entertainment for her new home. We could not be more excited!”

“I am so thrilled to be working with Shawn and the Pennington Entertainment team,” says Linsey. “I have been doing everything independently for a while now, so it’s exciting to be able to focus more on the creative side of what I do. I believe that Shawn’s experience and knowledge of the business will only make myself and my small, creative team stronger. This feels like a great partnership and I’m looking forward to doing big things together.”

Blind Boys of Alabama, Lera Lynn, Holly Williams, Robbie Fulks, Jon McLaughlin and more will be part of the Musicians Corner lineup for its Summer 2016 season, which will launch Saturday, Aug. 6. Additional summer season shows will follow on Aug. 13, 20, 27, and Sept. 3.

“We have not hosted events in August since 2010,” said John Tumminello, Executive Director. “We’re bringing back summertime music in the park with an incredible lineup of talented artists.”

Saturday, Aug. 6 will feature performances from Blind Boys of Alabama, AJ Ghent Band, Matt Brown and Dwan Hill. Aug. 13 will include a lineup of Lynn, McLaughlin, The Sisterhood (Alyssa Bonagura & Ruby Stewart), and The Daybreaks.

Andrew Ripp and Vanderbilt Melodores are among the performers slated for Sept. 3. 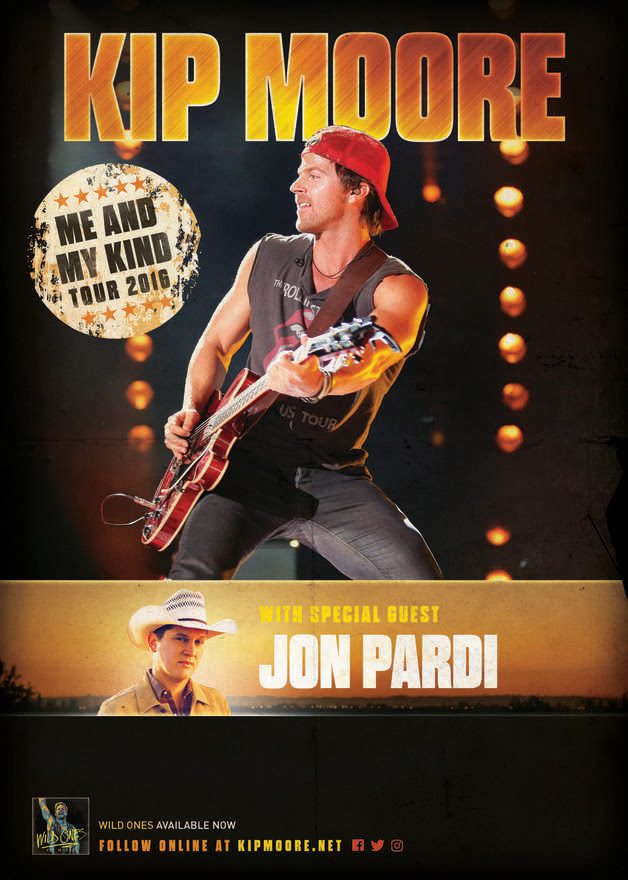 Kip Moore will headline the Me and My Kind Tour with special guest Jon Pardi this fall. The tour launches Sept. 30 in Oklahoma City.

“Being out on the road is where me and the band feel most at home,” said Moore. “Even though we’ve been nonstop already this year with the headlining shows in The UK and the Miranda tour, it just doesn’t feel natural to slow down, our live show is when we are in our element. I’m really looking forward to having the opportunity to test some new material that we’ve been working on out on the road and having Jon out with us too, I’m sure we’re going to get into some trouble out there.”

Me and My Kind Tour Dates: 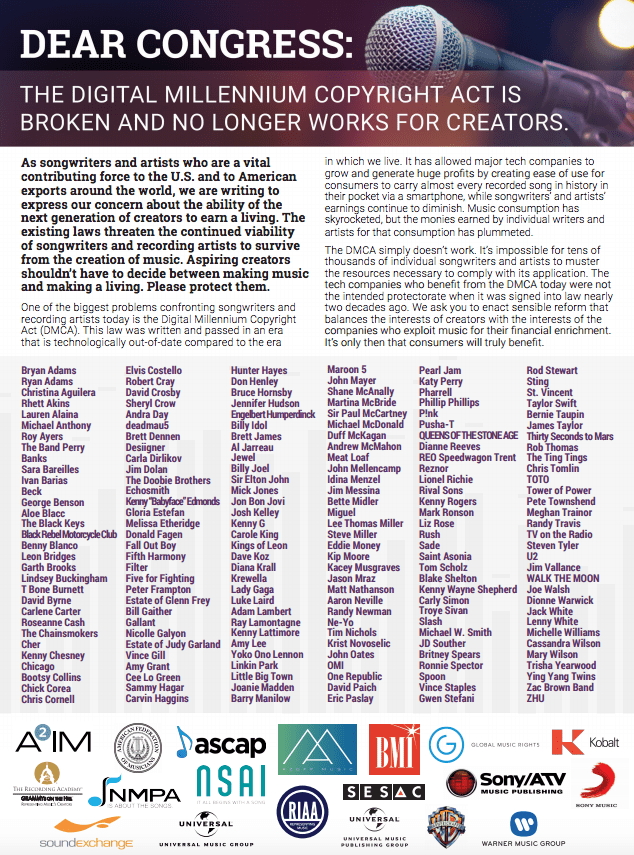 A number of Nashville’s top songwriters and recording artists have banded with musicians from all genres to urge lawmakers to reform the Digital Millennium Copyright Act (DMCA). The call to action is part of an ad that is running in Washington D.C. magazines The Hill, Politico, and Roll Call. The DMCA was enacted in 1998.

Under the DMCA, record labels and publishing companies are responsible for approaching website owner/operators to take down pirated music that they have illegally made available on their sites. It was signed into law during the era of dial-up internet and static websites, a time before music streaming and downloads had a dominant impact on the sale of music.

“This is a historic moment in the music business,” says Irving Azoff, chairman and CEO of Azoff MSG Entertainment. “This diverse group of artists coming together illustrates that this is a movement, which should not be underestimated.  In all my years, this is the only time I can remember everyone—artists, songwriters, managers, labels, publishers, PROs—agreeing and collectively calling for change.  This is just the beginning.  The entire industry is united and committed to pursuing a fair resolution. We are fighting for the future.”

The petition comes as many major labels are in discussions to renew their licensing deals with YouTube. The U.S. Copyright Office is also studying the DMCA’s safe harbors, while the U.S. House of Representatives Judiciary Committee is reviewing copyright law.

As songwriters and artists who are a vital contributing force to the U.S. and to American exports around the world, we are writing to express our concern about the ability of the next generation of creators to earn a living. The existing laws threaten the continued viability of songwriters and recording artists to survive from the creation of music. Aspiring creators shouldn’t have to decide between making music and making a living. Please protect them.

One of the biggest problems confronting songwriters and recording artists today is the Digital Millennium Copyright Act. This law was written and passed in an era that is technologically out-of-date compared to the era in which we live. It has allowed major tech companies to grow and generate huge profits by creating ease of use for consumers to carry almost every recorded song in history in their pocket via a smartphone, while songwriters’ and artists’ earnings continue to diminish. Music consumption has skyrocketed, but the monies earned by individual writers and artists for that consumption has plummeted.

The DMCA simply doesn’t work. It’s impossible for tens of thousands of individual songwriters and artists to muster the resources necessary to comply with its application. The tech companies who benefit from the DMCA today were not the intended protectorate when it was signed into law nearly two decades ago. We ask you to enact sensible reform that balances the interests of creators with the interests of the companies who exploit music for their financial enrichment. It’s only then that consumers will truly benefit. 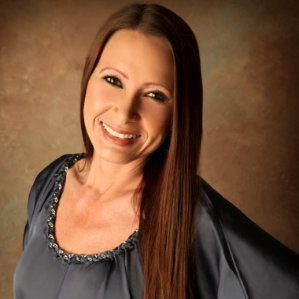 Becca Walls has been hired by Big Machine Label Group as Manager, Content and Host for Big Machine Radio.

Walls broadcasts a daily show on Big Machine Radio from Nashville in addition to live, on-location events such as the CMT Awards and Live From CMA Music Festival.

Walls previously hosted a midday show at WKDF/NASH-FM for 16 years.

“We all know what a professional Becca is at including the listener’s perspective as she interacts with the artists. With Becca, we will able to take full advantage of all the amazing content the BMLG team and artists provide,” said Dave Kelly, Director of Strategic Research. “We are continuing to grow access points for Big Machine Radio and are in the process of launching other forms of direct to consumer content delivery. Becca is the perfect person for the future of what we are building.”

“I am beyond excited to be part of the innovative and hard-working team at BMLG in a position that combines my passion for radio with my love of music and interviewing artists,” said Walls. “The opportunity to be creative and put all my skill sets to use is a dream scenario for me. In addition, I have always had a great respect for Scott Borchetta and am thrilled to be reunited with Dave Kelly, who was my OM/PD for several years at Citadel/Cumulus Nashville.”