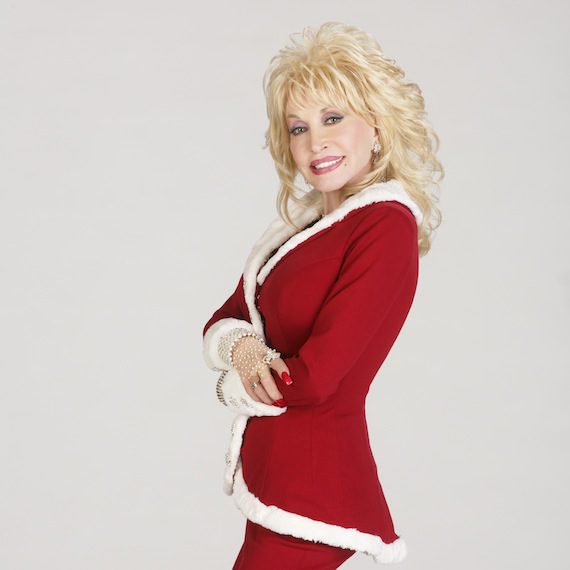 NBC has announced a new TV movie titled Dolly Parton’s Christmas of Many Colors: Circle of Love. Set to air in 2016, the premiere date will be announced in the coming months.

“I was so overwhelmed and touched by how many people watched Coat of Many Colors and their reaction to it,” Parton said. “The song ‘Coat of Many Colors,’ of course, has always been my favorite and has touched so many people through the years, especially me. It is a true story from a very special time in my childhood. I am so happy to share this story with the viewers and to say there is so much more to tell because mine truly has been a life of many colors. I hope the viewers will fall in love all over again.”

Press materials summarized the project in this way:

The film delivers Christmas joy and peril as an unexpected blizzard threatens the Parton family, while at the same time Dolly’s father (and his kids) make sacrifices to raise enough money to finally buy his loving wife the wedding ring he could never afford to give her. Meanwhile, an important person in little Dolly’s life begins to see that her amazing voice and musical gift might just be made for something bigger than rural Tennessee.

“It’s no secret that everyone loves Dolly Parton and the response to our first movie was overwhelming, both in terms of the size of the audience and outpouring of love for a film with family values and faith,” said Robert Greenblatt, Chairman, NBC Entertainment. “So it felt like a no-brainer to bring this talented cast back together and tell another compelling holiday story culled from Dolly’s own life growing up in the Smoky Mountains of Tennessee. Her spirit and belief in God — and her music — will infuse this movie with the true spirit of Dolly Parton.”

Dolly Parton’s Christmas of Many Colors: Circle of Love is written by Pamela K. Long. She executive produces with Sam Haskell and Dolly Parton. The film is a production of Magnolia Hill Entertainment and Dixie Pixie Productions in association with Warner Bros. Television. Stephen Herek, who directed the original film, is also back to direct the sequel. 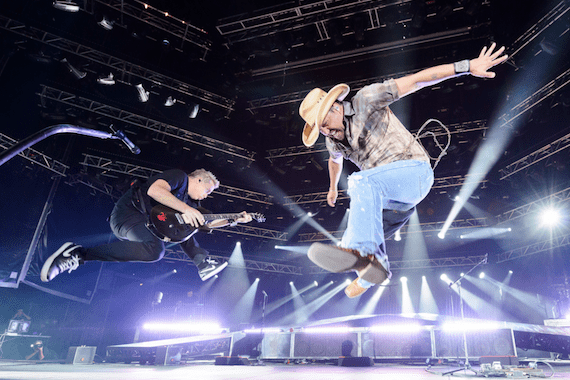 Jason Aldean’s upcoming tour stop in Chicago will be filmed for a two-hour CMT special titled Concert of the Summer, a new franchise for the network.

Thomas Rhett, A Thousand Horses and surprise guests from Chicago’s Windy City LakeShake festival will also be featured in the show.

Aldean’s Six String Circus Tour launches Thursday, May 19, in Rogers, Arkansas. He is scheduled to headline Windy City LakeShake on June 19. An air date for the special has not been announced.

Each year, CMT will proclaim one festival or event as the year’s concert of the summer and film it for television, online and social media.

“Summer festivals live large in the culture. Fans from all walks of life make pilgrimages to celebrate the power of music,” said Brian Philips, President of CMT. “With our Concert of the Summer event, we are going to capture the definitive documentary and companion programming for this big show. We’re counting on powerhouses Jason Aldean, Thomas Rhett and A Thousand Horses to rock the masses. Viewers will experience the party through the eyes of both artists and fans.”

“It’s always cool when you’re approached about new ways to get music to your fans,” said Aldean. “So when CMT asked about coming out to LakeShake, I was immediately into it. We’re going to slap an all-access pass on them for the day and play until they pull the plug.”

Cyndi Lauper kicked off her Detour Tour at Nashville’s Ryman Auditorium on Monday evening, May 9, launching her 27-city trek across the United States and Europe.

Aahhhh #Nashville! Night 1 of my tour starts tonight at the #Ryman! What songs do you want to hear live? ?

She began the show with “Funnel of Love,” the first track on her new album and took the audience on a musical journey through her latest project offerings intertwining both new and old material. While “detouring,” her performances of classic country standards from her latest project included “Walkin’ After Midnight,” “The End Of The World,” “Heartaches by the Number,” and “Misty Blue.”

Her performance of “Money Changes Everything” brought the crowd to their feet with the audience gladly singing along to her hit tunes that followed, including “Girls Just Want To Have Fun” and “Time After Time” before closing out the show with an encore of “True Colors.”

With this being the first stop of the tour, Lauper admitted she was still “working some of the kinks out” but the audience didn’t mind at all.

Fans have the opportunity to donate to the True Colors Fund and a chance to win exclusives, including a dinner with Cyndi Lauper backstage. Lauper is playing select dates during the DETOUR tour with Boy George, including the June 1 Vienna, Va. show, where the winning donation will have an opportunity to meet the artists backstage, have dinner with Lauper among other perks. The True Colors Fund, an organization co-founded by Lauper, works to end homelessness among lesbian, gay, bisexual and transgender youth. To donate and enter for chances to win exclusives, click here.

Afterwards, Lauper visited with music industry members at a private reception at the Ryman. 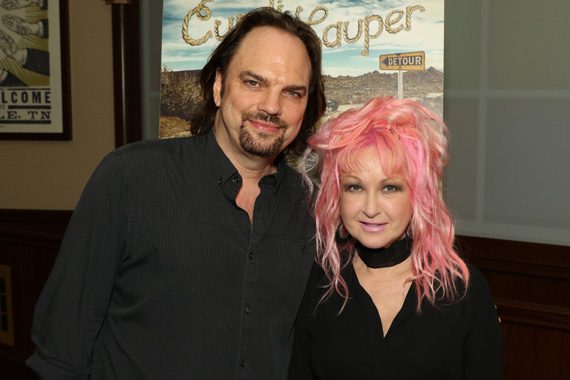 Lauper’s country album Detour, which released May 6, includes her renditions of several classic tunes from the 40s, 50s, and 60s. Detour features guest appearances from Vince Gill, Emmylou Harris, Alison Krauss, Jewel and Willie Nelson. Lauper recorded the album in Nashville with many of the city’s top session players.

She visited MusicRow earlier this year to discuss her new album and tour. 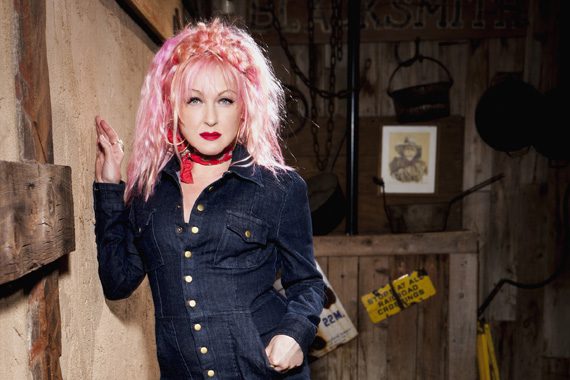 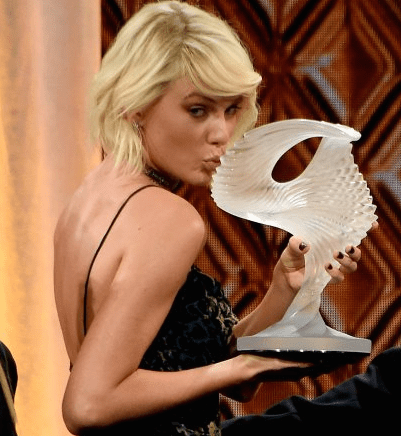 Taylor Swift was honored with The Taylor Swift Award last night (May 10) during the 64th BMI Pop Awards in Beverly Hills, California. This marks the second time in BMI’s 76-year history that the company has bestowed an award in someone’s name, following a similar award for Michael Jackson in 1990. 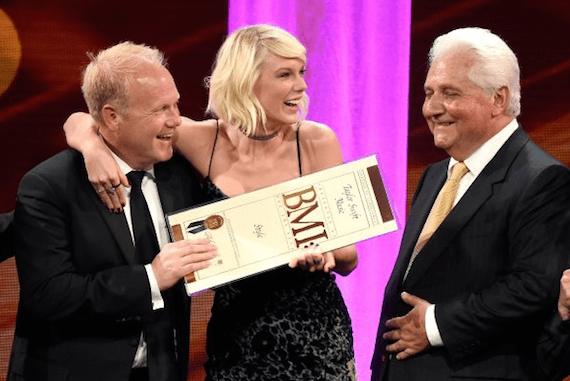 Jeff Bhasker was honored as part of the creative team behind “Uptown Funk,” which took home BMI Pop Song of the Year. Bhasker has also worked with Cam as producer and co-writer.

Sony/ATV was named BMI Pop Publisher of the Year, with 23 of the year’s most-performed songs. Barry Mann and Cynthia Weil were honored with the BMI Icon Award for crafting classics including “We Gotta Get Out Of This Place,” “On Broadway,” “Somewhere Out There,” and “You’ve Lost That Lovin’ Feeling.” 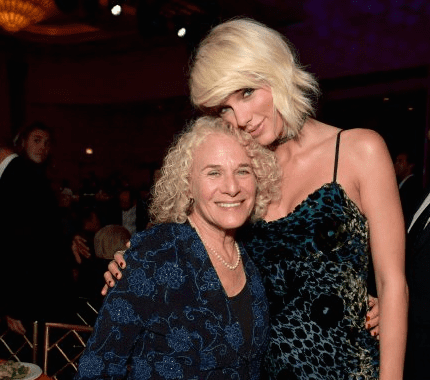 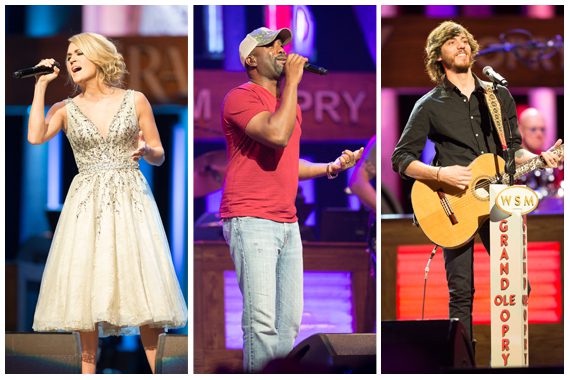 Kimberly Williams-Paisley is scheduled to sign copies of her new book, Where The Light Gets In, in The Opry Shop at 5:30 p.m. The actress will return to the Opry stage for her second visit as a guest announcer later in the evening.

Underwood is scheduled to play the Opry twice in advance of the June 7 shows, appearing on May 20 and 21. 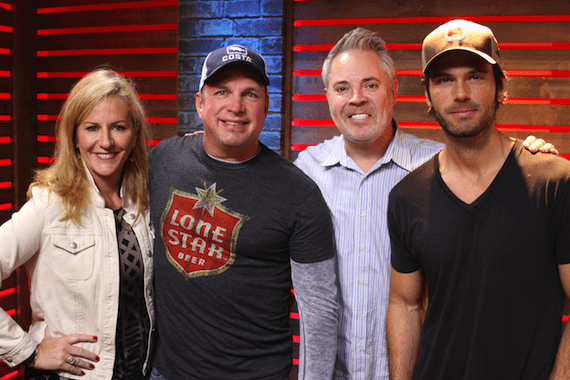 Garth Brooks will play his first New York City concert in 19 years on July 9 at Yankee Stadium. He made the announcement on Wednesday morning (May 11) on the NASH radio program, America’s Morning Show.

Brooks’ show will be the first country music concert to be held in the new Yankee Stadium. Trisha Yearwood will open the show. Tickets go on sale on May 20.

According to its official website, Yankee Stadium has a seating capacity of 50,287. It opened in 2009.

This is Brooks’ first concert in the city since 1997, when he played for nearly a million people in Central Park. That concert was filmed for an HBO special. 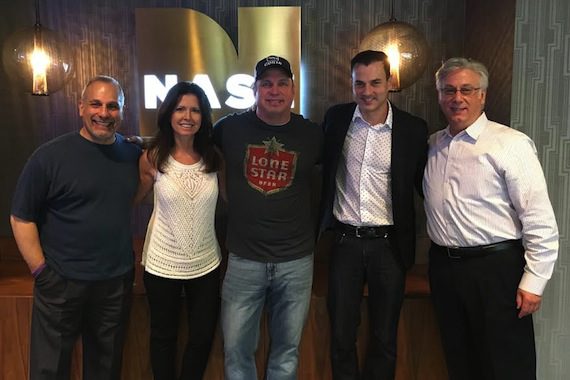 SESAC hosted a lineup of music at the 21st Annual Key West Songwriter’s Festival. The Brunch-In-The-Round was held at Kelly’s Caribbean Bar and was hosted by SESAC affiliates Rob Hatch and American Young and featured performances from songwriters Steve Bogard, Justin Ebach, Matt Willis, Nicolette Hayford, Justin Wilson and Brian White among others.

The annual Key West Songwriters Festival revolves around five days of performances from over 200 top songwriters and artists. 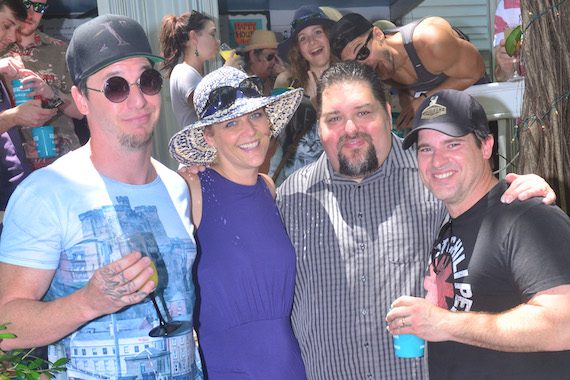 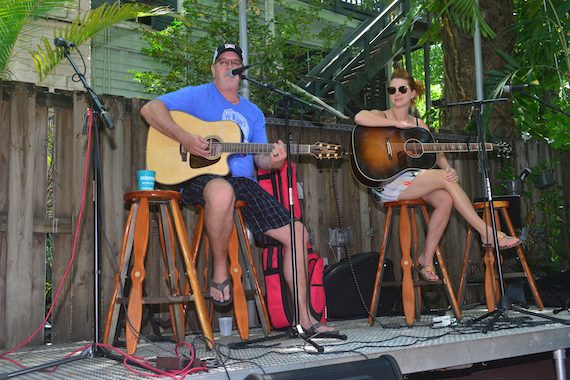 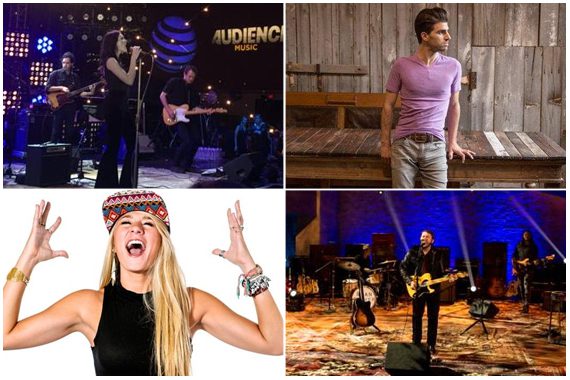 The show crosses a diverse array of musical genres. Other participating artists include Elliot, Starr, Oh Whitney, The Sisterhood, and Armstrong Leigh.

“With the new series, we are leveling the playing field for highly talented emerging artists by helping them cut through the noise,” said Bart Peters, Vice President of Development and Production, AT&T. “We are giving them the same performance opportunity for the television broadcast, online exposure and promotion. The inspiration for the spotlight series came from watching Isac Elliot perform at a showcase — and we are pleased that Isac is performing in our spotlight series.”

Audience Network reaches over 28 million subscribers airing via national broadcast on DIRECTV (Ch 239) and U-verse (Ch 1114), on directv.com and uverse.com, and on smartphones and tablets via the DIRECTV and U-verse apps. 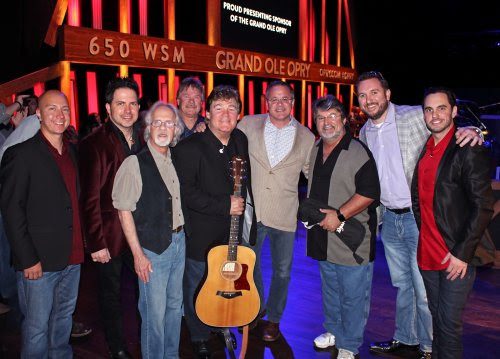 For the first time in nearly 25 years, Shenandoah returned to the stage of the Grand Ole Opry this past weekend.

Fronted by Marty Raybon (who has rejoined the group after a 17 year absence), the country group performed on Friday and Saturday nights, offering several of their hit songs including “The Church on the Cumberland Road,” “Two Dozen Roses” and “I Wanna Be Loved Like That.” 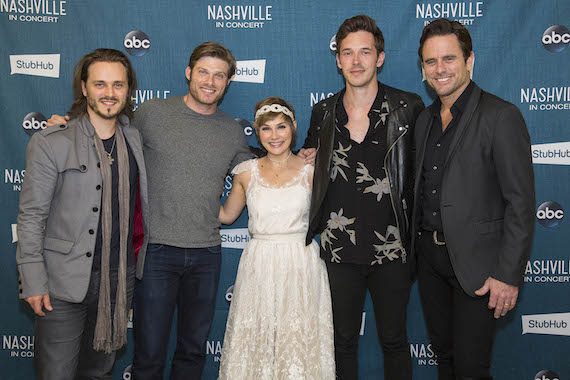 The tour is produced by Opry Entertainment. 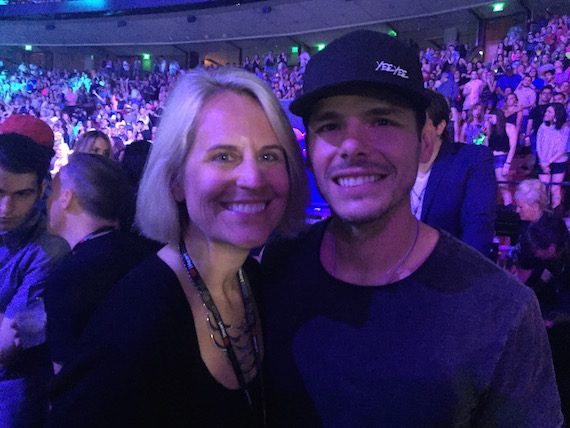 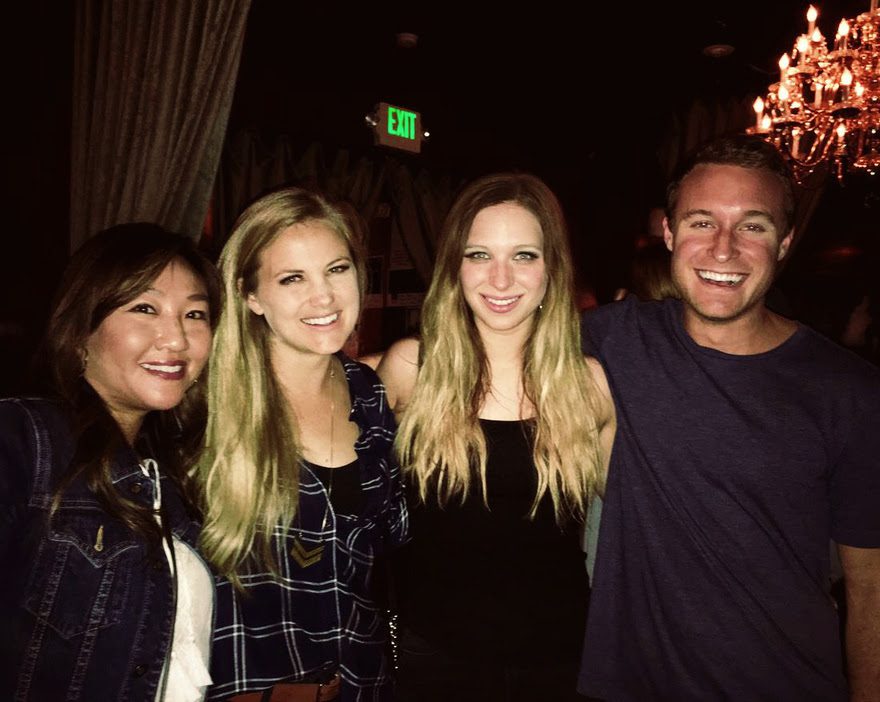 Big Spark Music Group’s Olivia Lane, currently featured on iTunes Country New Artist Spotlight, performed at The Hotel Café in Los Angeles on Tuesday, May 3. After her visit earlier in the day to Radio Disney, the staff came to her concert to listen to her play live. 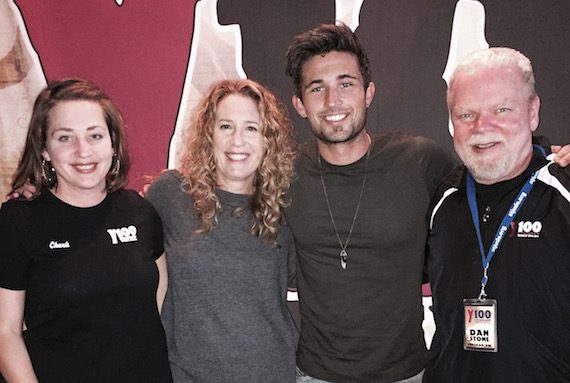 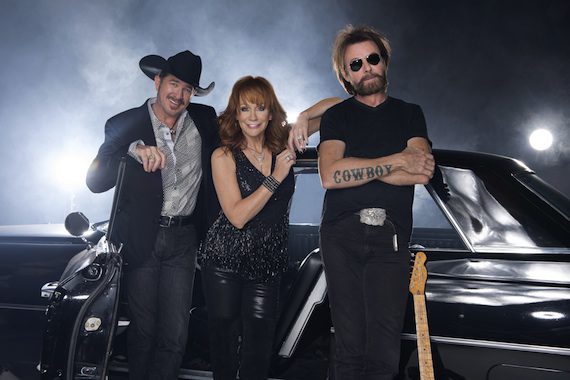 Reba and Brooks & Dunn have added 12 shows to their residency at The Colosseum at Caesars Palace in Las Vegas.

Tickets for these shows will go on sale Friday (May 13).

The collaboration is a culmination of the friendship and musical admiration Reba and Brooks & Dunn have shared since first touring together in 1993. Presented jointly by Caesars Entertainment and AEG Live, the two-hour production features more than 30 hits backed by a band of 10 players from both of their touring bands. The set includes solo and joint performances of their signature tracks including “Fancy,” “My Maria” and “Cowgirls Don’t Cry.”