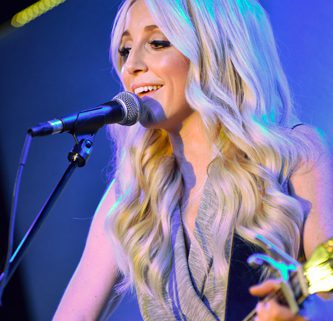 Ashley Monroe is not a stranger to Jack White‘s Third Man Records in Nashville. Nor is the Warner Nashville star unaccustomed to a flawless live performance. Monroe has performed with legends Wanda Jackson and then with Willie Nelson for his 80th Birthday CMT event at Third Man Records, but last night (May 12) was for her direct-to-acetate live recording.

Her artistic magic was on full display at the gathering in Jack White‘s famed Blue Room. Three musicians joined Monroe in front of an audience of around 300 VIP guests, many part of the Music Biz 2015 conference. 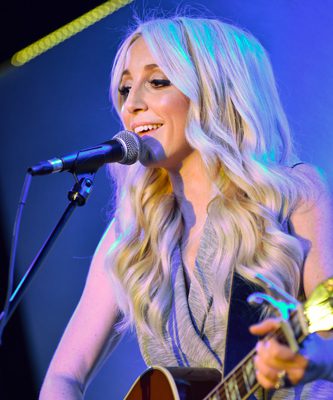 “It’s very crucial we get this right,” said Monroe as she took the stage with John Shaw (guitar), Jenee Fleenor (fiddle) and Johnny Duke (lead guitar).

Born to perform, Monroe kicked off with “Two Weeks Late,” a track off her Warner debut, before recording began with additional major label debut tracks “Like A Rose” and “Weed Instead of Roses.” Her 2006 title “Satisfied” was recorded during the B-side phase of the evening.

Performances of highly anticipated new material included the superb title track off the forthcoming release, The Blade, in addition to “Dixie,” “Bombshell,” “Has Anybody Ever Told You,” “I’m Good At Leavin'” and her current single “On To Something Good.” Monroe closed out the evening with a solo-acoustic performance of “Hickory Wind,” Gram Parsons‘ 1968 hit.

The studio records only a handful of performances a year for its Live at Third Man Records series. Performances are available to attendees with a black/blue 12″ LP, then to the general public as traditional black vinyl.