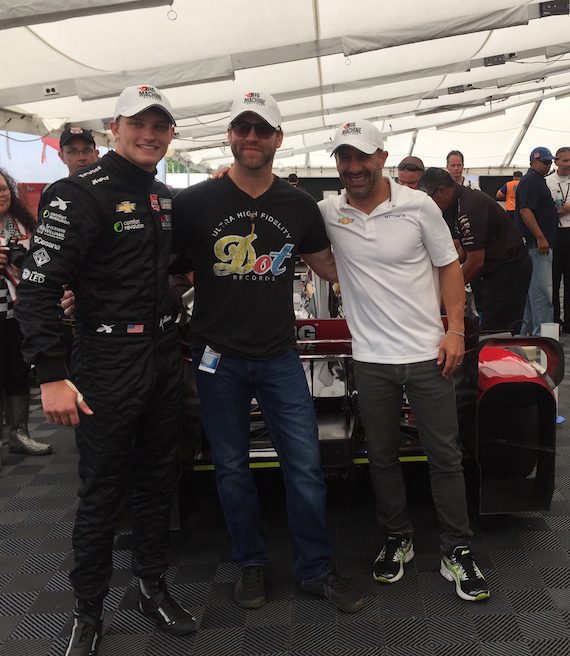 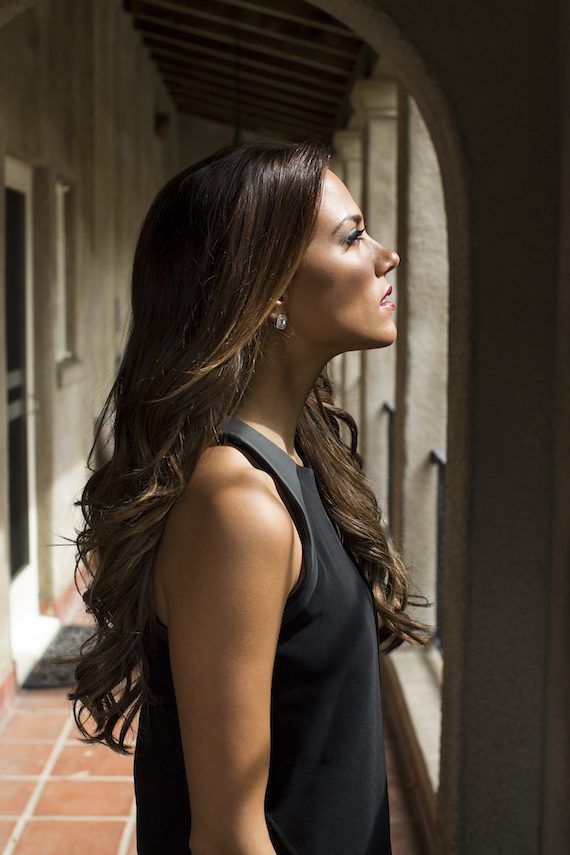 Jana Kramer will perform her current single, “I Got The Boy,” during an appearance at the Grand Ole Opry on Tuesday, April 28.

“It’s such an honor to play the Opry and share the stage that has been home to so much history,” says Kramer. “The Opry has a special place in my heart, and I can’t wait to be back.”

Her latest single, “I Got The Boy,” is about watching a past flame move on. The song hit home for Kramer when she first heard it. “I’ve been trying to write this song about my high school sweetheart for years,” she says. “It’s amazing how songwriters can write your life and these lyrics say what I was trying to write for years.”

The song will be featured on Kramer’s forthcoming album, produced by Scott Hendricks.

The Swon Brothers Perform at Generations Riviera Maya in Mexico

The Swon Brothers recently performed for a packed crowd at Generations Riviera Maya in Mexico. The duo also shared the performance with CMT, offering exclusive access to their own experiences on CMT’s social media, and provided live updates to CMT’s followers via Snapchat. 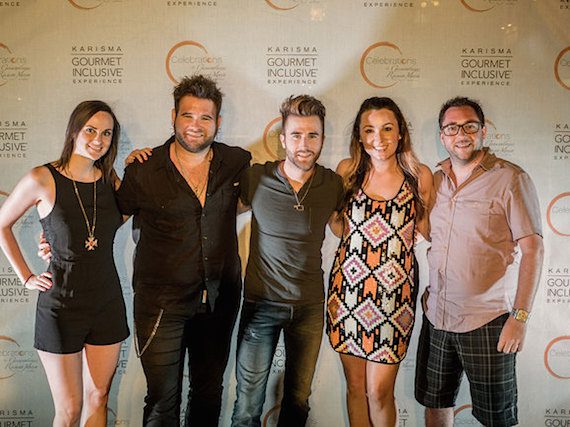 Jamey Johnson, Amanda Watkins Team Up For “If I Was Over You” 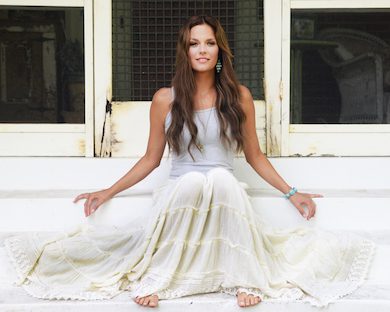 Jamey Johnson and singer-songwriter Amanda Watkins blended their voices for the new duet, “If I Was Over You,” which is now playing on Sirius XM’s The Highway. Johnson released the Grammy-nominated Living For A Song: A Tribute to Hank Cochran in 2012. Watkins is known for her work as part of the duo Miss Willie Brown, as well as on the Big & Rich song “Cheat On You.”

“I love Amanda’s voice,” Johnson says. “She and Rivers Rutherford wrote a great song and I’m proud to be a part of it.”

The song can also be heard on Soundcloud. 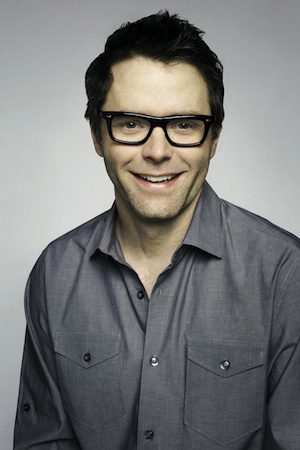 The book addresses Bobby Bone’s (real name Bobby Estell) childhood, growing up as the son of a single, addicted mother and an absent father. He grew up in Mountain Pine, Ark., a lumber mill town with a population of under 800. He became the first in his family to graduate from college, and earned his first job in radio at age 17.

After taking the on-air name “Bobby Bones,” he built a career in radio, working in several cities including Little Rock, Ark., and Austin, Texas, before joining with iHeartMedia.

“I’m not a traditional country music guy,” says Bones, “but the music reflects where and how I grew up, and yes, you could say my life has been like a country song, full of highs and lows and some crazy stuff along the way. I aim to tell it from the front seat of this roller coaster ride.”

No release date or title for the memoir have been announced at this time. 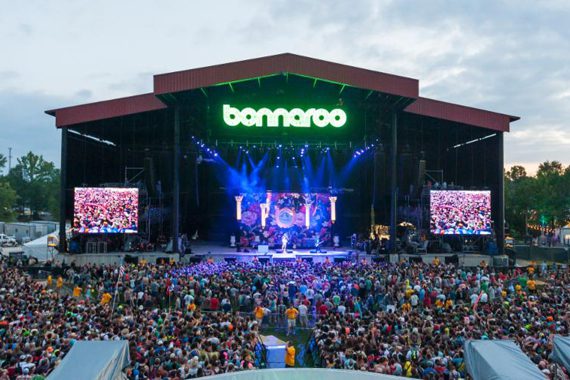 Although the official livestream lineup will be announced at a later date, this year’s festival will include more than 100 artists from the likes of Billy Joel, Mumford & Sons, Kendrick Lamar, Alabama Shakes and D’Angelo.

“We’re excited to partner with Red Bull to create a rich digital destination that extends the Bonnaroo experience beyond the festival grounds,” said Jonathan Mayers, co-creator of Bonnaroo. “Through the Red Bull TV livestream, we’re able to connect with our global community of fans across more platforms than ever to ensure that they’re a part of the festival experience from anywhere in the world.” 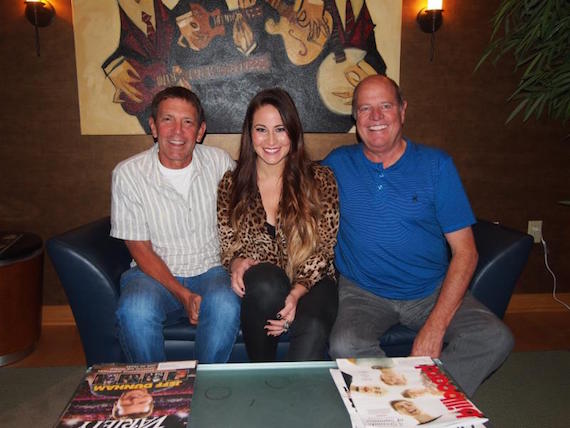 Singer-songwriter Chelsea Bain has inked a deal with booking agency WME. Keith Miller will be her responsible agent.

“The first time I saw Chelsea perform, I was blown away with how she commands a stage,” said Miller. “We are excited to have her in the WME family and build on the impressive fan base she has created.”

After recent performances at various NASCAR and NFL events, Bain is in the studio writing and recording for her debut album, which is slated for release later this year. 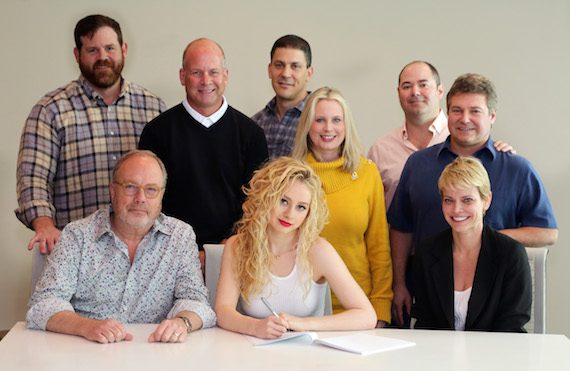 Watch the lyric video for Georgia’s single “Ridiculous” below.

Women Rock For The Cure has set the date for its 2015 annual Young Survivors Retreat, aimed at helping connect young women who are fighting breast cancer. The four-day event will be held Sept. 24-27 at Deer Run Retreat Center, located at 3845 Perkins Road in Thompson’s Station, Tenn. The all-expenses paid event is open to approximately 20 women, who have been diagnosed between the ages of 18-40 years, and are either undergoing treatment or are survivors of breast cancer.

Activities during the event include sessions on art, relaxation, nutrition, fertility, relationships, and beauty tips.

The non-profit organization is helmed by Sweet Talk Publicity founder Jensen Sussman, who shares her own personal experience with the retreat: “Having to face breast cancer as a young woman is physically, emotionally and mentally challenging. For WRFTC to bring together these women from all across the country who share in the same struggles and see how their connection forms a sisterhood of hope is inspiring.”

WRFTC raises funds for the Young Survivors Retreat throughout the year, and covers all travel expenses to and from Nashville for the retreat’s attendees. Applications will be accepted beginning May 1 at 9 a.m. CT through May 4 at 5 p.m. CT, at womenrockforthecure.org. To donate to Women Rock For The Cure, click here. 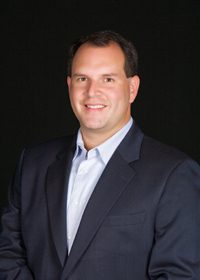 George Uribe, president and CEO of guestbooker.com has been named an Ellis Island Medal of Honor Winner, presented by the National Ethnic Coalition of Organizations (NECO). Uribe will join an esteemed class of professionals honored with this distinction, including Rudolph Giuliani, Hillary Rodham Clinton, Joe DiMaggio, John Glenn, Quincy Jones, John McCain and Rosa Parks. The Ellis Island Medal of Honor is awarded annually to a group of distinguished American citizens who exemplify a life dedicated to community service.

Uribe, a veteran television producer, leads a team of television producers and bookers specializing in strategic placement of guests on local, national and international television and radio programs. He served as a non-commissioned officer for the US Army Reserve, and has received numerous awards for media coverage by his peers including the National Academy of Television Arts & Sciences New York Chapter. He is the co-founder of the Miami Media Mixer, Music City Media Mixer and New York Newsmakers. Uribe was recognized by the Nashville Business Journal as the “Most Admired CEO” in his city and also serves on the Board of Rocketown, a regional outreach center for more than 800 teens across from Middle Tennessee. 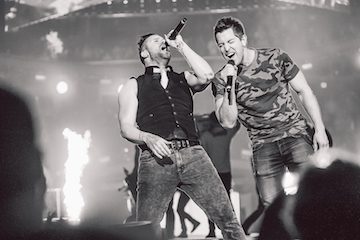 NewSong’s Winter Jam 2015 Tour Spectacular wrapped its biggest tour to date with more than 600,000 people attending 47 shows across the country. The tour launched its 20th anniversary tour Jan. 2. Since then, the tour has notched 38 sellout shows and played to capacity audiences at St. Louis’ 19,000-seat Scottrade Center; Tampa, Fla.’s 17,000-plus seat Amalie Arena; and Detroit’s nearly 17,000-seat The Palace of Auburn Hills, among other venues. The tour concluded March 29.

Winter Jam 2015 was headlined by Skillet, along with Jeremy Camp, Francesca Battistelli, Building 429, for KING & COUNTRY, Family Force 5 and evangelist Tony Nolan, while the Pre-Jam Party included Blanca, About A Mile and VERIDIA. 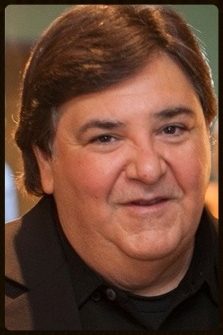 “I’m thrilled to have John become part of our team,” says Momentum Label Group’s Managing Partner, Jimmy Murphy. “I’ve long been impressed by his creativity in marketing and branding. His passion and energy for recognizing and developing unique artists is a great fit for MLG.”

Alexander worked with Patty Loveless in the ’80s and more recently with artists including Sarah Darling. 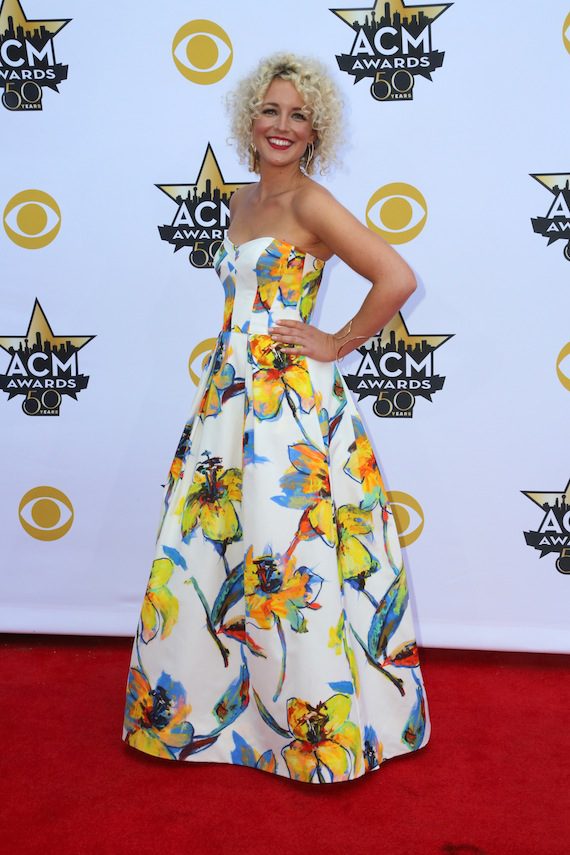 Rising Arista Nashville singer/songwriter Cam recently debuted the lyric video for her debut single, “My Mistake.” The track, from her Welcome to Cam Country—EP, is gaining traction and praise at country radio.

Picked by Spotify as the Country Spotlight artist to watch in 2015, the songs on the EP have collectively amassed 7 million streams in less than three months, with more than 2.3 million for “My Mistake” alone.

The sunny California native performed at the sold-out Stagecoach Music Festival in her home state over the weekend on the “Mane Stage.” She played SXSW last month, and also at the recent ACM Party for a Cause Festival. 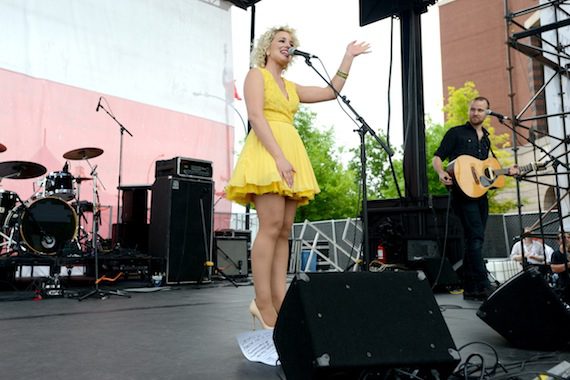 Cam performs at the 3rd Annual ACM Party for a Cause Festival. Photo: Neil Cooper/Getty Images 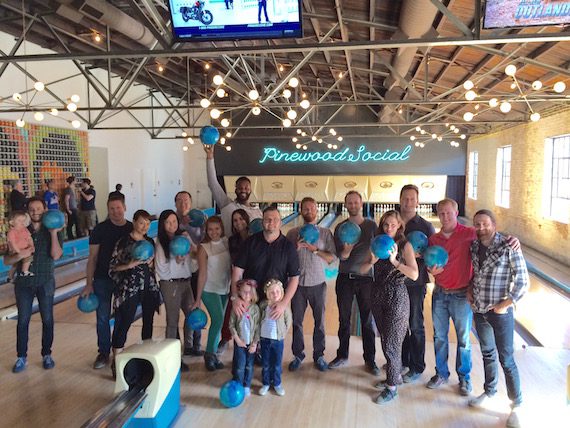 ole Writer Takes To The Road 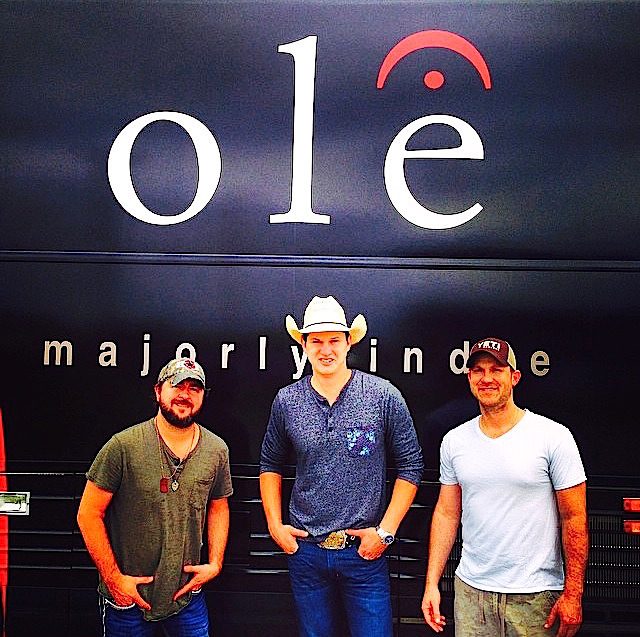 Warner Bros. Records recording artist Michael Ray celebrated a special occasion last Friday (April 24), making his debut on the Grand Ole Opry stage performing his hit single “Kiss You In The Morning.” Ray also honored his grandfather, who helped him get his start in country music through their family band, with a rendition of Porter Wagoner’s “Green, Green Grass of Home.” 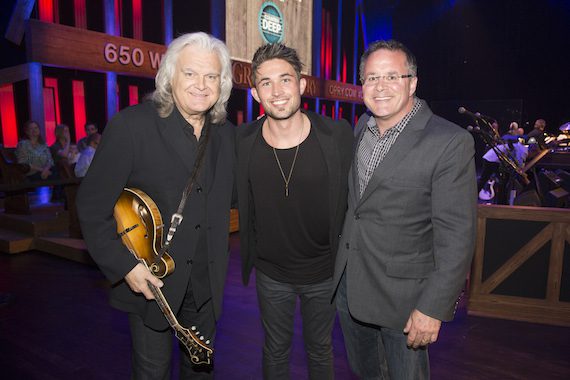 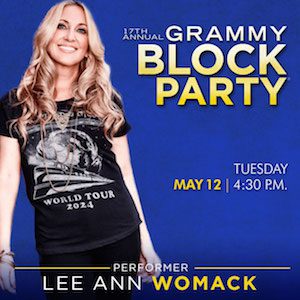 The Grammy Block Party will be held at Nashville’s Cumberland Park, located at 592 S. First Street, on Tuesday, May 12. The event will begin at 4:30 p.m. Free parking will be available in LP Field’s Lot R.

The private event is open only to Recording Academy members and their guests.