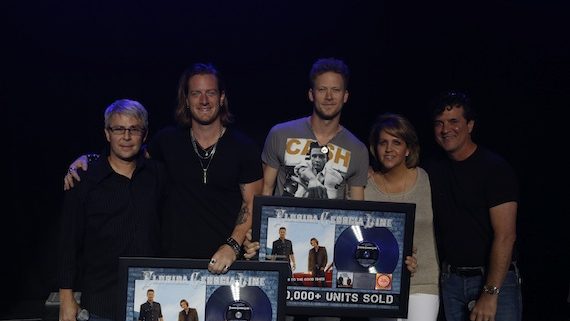 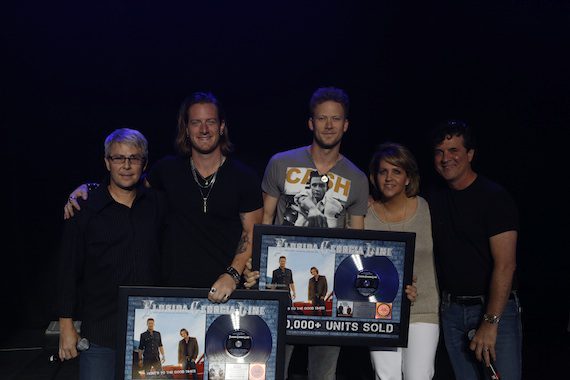 Brian Kelley and Tyler Hubbard of Florida Georgia Line have seen a hectic past year, as the duo’s fame has skyrocketed on the success of singles including “Cruise,” “Shine On” and “‘Round Here.” Thanks to the irresistible blend of rock, country and hip-hop that permeates their sound, along with endless youthful energy, Hubbard and Kelley have risen from opening slots on Taylor Swift‘s RED Tour and Luke Bryan‘s Dirt Road Diaries Tour. Soon, just over a year since they scored their recording contract with Big Machine Label Group, they will add a new title to their musical resume: headliners.
The duo welcomed several hundred Nashville music industry members, as well as a select group of fans, to get an early look at the Here’s To The Good Times Tour, which will launch Oct. 3 in Brookings, S.D. The 32-city tour has already completely sold out at each tour stop. Big Machine Label Group’s Scott Borchetta and Jimmy Harnen welcomed the crowd to Nashville’s Bridgestone Arena on Tuesday (Oct. 1).
What better way to start a party than with some stellar sales accomplishments? Borchetta and Harnen feted the duo with several accolades. Florida Georgia Line’s “Round Here” has been certified gold by the RIAA. Their debut album, Here’s To the Good Times, has earned platinum certification for more than 1 million units sold; their debut single “Cruise” has earned the most weeks at No. 1 on the Billboard Country charts since its inception in 1944.
Borchetta also announced that Florida Georgia Line’s debut album will get the deluxe repackage treatment, to include five additional songs. Here’s To The Good Times…This Is How We Roll will bow on Nov. 25. “It’s tough when we release an album every year, or year and a half, because we love to write songs,” said Hubbard. “This way we can get some new music out to you.” 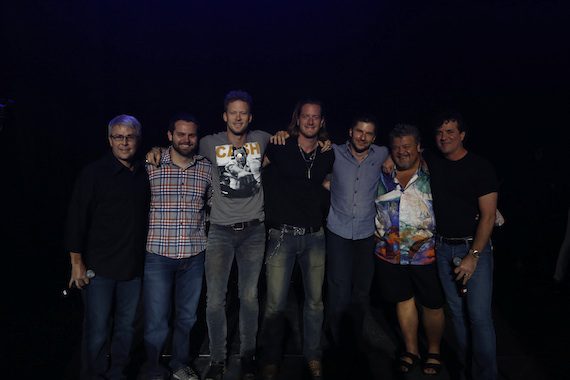 “We are ready to party our faces off with this tour,” said Hubbard. That means that though they just purchased a home in Nashville from their income, they won’t be spending a considerable amount of time there just yet.
They certainly made their party ambitions clear from the beginning with the hip-hop infused “Itz Just What We Do,” followed by “Tip It Back.” The duo’s non-stop touring over their past five years has paid off; few artists as relatively early into their careers as this duo are as energetic and comfortable commanding the audience’s attention.
The smoke, lights, and video throughout the performance were befitting a high-end production. Video screen images of license plates outfitted with song lyrics on “Round Here,” gave a subtle nod to fans in every state. “Here’s To The Good Times” is as poignant as it is party anthem, thanks to a photo retrospective of highlights from the duo’s early days, following the rise (so far) of their career. Images included concert photos, their signing with Big Machine Label Group, a stop at NBC studios, childhood photos, prom photos, their first award show experience, a snapshot with tour mate Taylor Swift, and even photos of the duo getting inked.
Current single “Stay” slowed down the pace momentarily, bathing the audience in blue and red lights and allowing the duo’s harmonies to be highlighted as an emotionally-charged video played in the background. From there the audience partied on with “Shine On” (with appropriately sunny yellow light streaming through the rehearsal space) and ending with the duo’s signature breakout hit “Cruise.”
As they embark on their first headlining tour, the duo is also nominated for their first Country Music Association awards, including Vocal Duo of the Year; New Artist of the Year; Single of the Year for “Cruise;” and Musical Event of the Year with Nelly for the remix of “Cruise.”