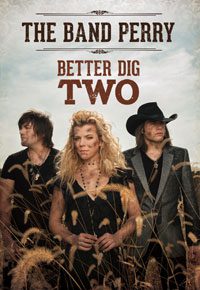 Some of country music’s latest singles have taken to the dark side. The Band Perry continues this trend with their current No. 1, “Better Dig Two.”
The sibling trio tops this week’s MusicRow Chart with a seemingly not-so-innocent song about death, telling the gravedigger “he better dig two.” Although lyrical ambiguity may leave the listener to draw independent conclusions, the dramatic production makes a strong case towards persuading a belief about vengeful underpinnings.
Written by Trevor Rosen, Shane McAnally and Brandy Clark, the nine-week Republic Nashville single precedes a yet-to-be-titled sophomore album from the band, expected April 2.
In November, MusicRow’s Robert K. Oermann looked positively upon the track, in his DISClaimer single review. “Very cool,” noted Oermann. “The crisp little banjo licks, thumpy percussion and sonic crashes give it a super dramatic sound. The dark, threatening lyric and the energetic vocals are pluses as well. Innovative and ear catching.”

If this bold single gives us any indication of the direction that the Perry siblings will take with this forthcoming April release, we continue to have great expectations. Catch a glimpse of the song’s visual interpretation with the official music video directed by Declan Whitebloom, below.