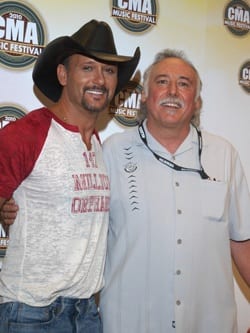 Tim McGraw and Steve Moore, Chairman of the CMA Board of Directors. Photo: Alan Mayor

Inspirational, is what it was.

Yes, the 2010 CMA Music Festival was a bounty of sounds. And, yes, it was intolerably hot. But the experience of being with those people, those fans, did my heart good. What spirit. What stamina. What love. I saw these things everywhere, from autograph lines, to concerts, from fan-club parties, to shops and restaurants.

Just for the record, we set one, as I predicted we would. The daily attendance was 65,000, and that doesn’t include the music industry or the media. The four nightly LP Field concerts were sell-outs at 49,000 per night.

How was it? Read on. 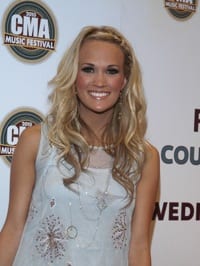 With a Thursday-night bill that was book-ended by Alan Jackson and Carrie Underwood, with oh-by-the-way Tim McGraw, Lady Antebellum, Danny Gokey and Jason Aldean along for the ride, no wonder opening night was such a smash. The Oak Ridge Boys sang the National Anthem and tossed in “Elvira” for good measure. 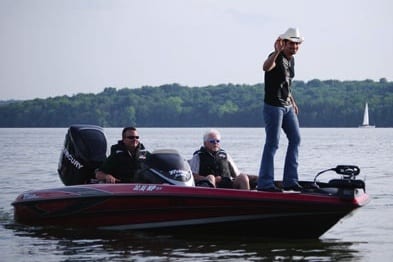 Speaking of Carrie, I believe she was the first with a fan-club party, having staged hers at Municipal Auditorium on Tuesday (6/8). On Thursday evening, Brad Paisley delighted the 700 attendees of his fan club party at Nashville Shores by arriving by boat. His crew and band members were good sports at being dunked into tubs. Are you with me? Brad’s new hit is “Water,” and the tour is “H2O.”

Across town at the Belcourt Theater, the 42nd annual IFCO show was staged. That’s right, this event actually pre-dates Fan Fair. Hit songwriter Victoria Shaw opened, bringing along Nashville Songwriters Hall of Famer Gary Burr as her accompanist and harmony singer. Also, Canadian country Female Vocalist of the Year winner Jessie Farrell sang splendidly. But the coolest surprise was Doug Stone, singing the Victoria-and-Gary tune “Too Busy Being in Love.” Gary Morris, who has shed 80 pounds, enthralled the crowd next.

The tuneful and hilarious double Grammy winning Riders in the Sky performed its show #4,598 for the IFCO crowd. Rhonda Vincent & The Rage brought out Gene Watson for their duet “Staying Together.” We couldn’t let him leave without “Farewell Party,” which Mr. Magnificent nailed to the wall.

The Chevy stage opened with James Wesley and closed with vivacious Emily West. The Durango Acoustic Corner in the Convention Center was at its best with the likes of Shawn Camp and The Randy Kohrs Band in the early afternoon. Alas, Ty Herndon up at the GAC Music City Zone Stage on the Courthouse Square, played to only around 100 people at noon. Sometimes during the weekend, acts up there played to less than 50. This zone is too far off the beaten track.

Riverfront Park had a splendid day, highlighted by the brilliant Patty Loveless and Chris Young around lunchtime. Mighty Craig Morgan was the afternoon finale. On a sadder note, one of the Riverfront security folks, Rock Solid’s Fred Stapleton, 34, expired that night in a closed medical tent. So far, the cause is unknown. 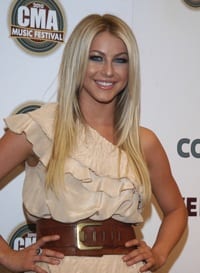 On stage, Storme Warren introduced Tennessee Titan Rob Bironis, who promised us a Super Bowl win (we’re going to hold you to that) before tossing footballs into the crowd autographed by teammates Kenny Britt and Courtland Finegan. The Band Perry did a fine harmonious job on “The Star Spangled Banner.”

Pageant singer Julianne Hough (See me toss my pretty hair? Look at these legs? How do you like by sparkly dress?) opened. You had to count Josh Turner as an evening highlight. The crowd squealed every time he hit a low note, formed dancing “train” lines and circled the stadium during “Long Black Train” and then kept on dancing in the aisles when he sang “Why Don’t We Just Dance.” 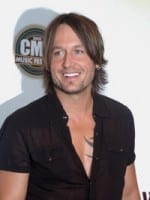 Miranda Lambert rocked out on my favorite, “Famous in a Small Town.” Then she led her band through a frothing set that included her biggest hits. Keith Urban had them singing along, word-for-word, from his very first song. During his set, he brought out Little Big Town, Sarah Buxton and Tony Brown to accompany him on “A Little Help From My Friends,” illustrated by Nashville Flood footage on the video screens. Nice. Reba McEntire and Kid Rock ensued. Speaking of the latter, can somebody explain his stardom to me? Yes, he’s a fun guy. But he can’t sing, doesn’t play an instrument, isn’t funny, has a foul mouth, isn’t handsome and is a second-rate rapper. I guess it is just one of those Mysteries of Life.

First up with a fan-club party on Saturday morning was Vince Gill, singing and telling stories at the Belcourt Theater. When I dropped by, the Fan Fair autograph booths at the Convention Center were being worked by Bryan White, Cherryholmes, Riders in the Sky, Julianne Hough, Mark Chestnut and Mark Wills. Plus, superstars Rascal Flatts were harmonizing to the delight of those gathered.

Upstairs at the Durango Acoustic Corner, Sarah Darling turned in a very nice set. Other highlights there included Lynn Anderson and Elizabeth Cook. Energetic Trent Tomlinson was tearing it up on the Chevy Stage when we arrived at the Bridgestone Arena. Jason Meadows made an appearance at the “K-9’s in Flight” show, but he proved to be an inept Frisbee tosser to the diving doggies. The Fontanel bus was parked nearby to transport fans to Nashville’s newest attraction.

One of the coolest sets of the festival was Jeffrey Steele’s inside the Country Music Hall of Fame’s Conservatory. The fans probably didn’t know who he was. But when he told stories and sang “My Town,” “Every Day,” “I’m Trying,” “Speed,” “Love Is a Beautiful Thing,” “My Wish” and the rest (sounding better than their hit recorded versions), they truly “got” what a Nashville songwriter is.

In the Family Zone, the ABC soap stars were autographing and doing Q&A sessions for the highly informed TV devotees. By the time we got to Riverfront, Hall of Famer Mel Tillis and his superb Statesiders band were giving a course in Country Music 101 and showing the kiddies exactly how to do it right. Gloriana followed. I bet you’d never predict those two on the same bill.

Schmoozing in the backstage hospitality tent were Neal Speilberg, Merrill Warner, Doug Casmus and Brad Schmitt. The General Jackson glided by picturesquely behind us.

The robust voiced Randy Houser proved to be a high-energy opening act, alternately soaring on his ballad “Anything Goes” and rocking out with “Boots On.” Wow. What a singer. Easton Corbin was next. Then Billy Currington livened things up with a hit-packed set. Storme introduced The Thunderbolts, the pilots who did the jet fly-overs each night following the National Anthem. They stood at parade rest while cheers erupted.

Dozens of beach balls bounced through the crowd while The Zac Brown Band warbled “Toes.” This was followed by the first Fan Fair “jam” instrumental, including a drum solo (!). Zac brought out Joey + Rory and harmonized with them on their ode to the fans, “This Song’s for You.” That was a nice moment. I loved it that Zac and his boys sang “Free,” which is my favorite by them. Martina McBride turned in a splendid set, which included some unexpected tunes as well as her hits. Rascal Flatts closed. 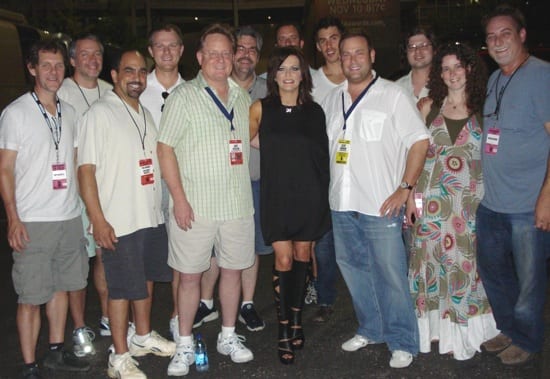 The big news on Sunday was Taylor Swift’s marathon, 13-hour-plus autographing stint at Bridgestone Arena. Some fans had camped out overnight outside the venue, and more than a few of the teen girls were in tears after meeting their idol. Taylor greeted each like a long lost friend: “Ooh, look how pretty you are. How are you?” I am told that there were 10,000 in there when she did her mini concert and that more than 1,000 autograph seekers were accommodated. The gig was on June 13, the length was supposed to be 13 hours and Taylor’s lucky number is 13. Got that?

Outside Bridgestone, Gary Morris kicked things off on the Chevy Stage. Inside the convention center, the Durango Acoustic Corner featured the likes of bluegrassers Doyle Lawson & Quicksilver, The Grascals and Cherryholmes. For the first time, performances on this stage were broadcast live by WSM’s 650. This experiment, usually hosted throughout the weekend by Bill Cody, was an audio triumph.

This year’s Sunday Mornin’ Country show was actually in the afternoon in TPAC’s Polk Theater. It was a tribute to Roy Clark and a Hee Haw reunion featuring Roni Stoneman, Charlie McCoy, The Nashville Edition, Lulu Roman and more.

More industry folks than ever packed the CMA suite that night at LP Field. Ed Hardy, Sarah Trahern, Bobby Young, Jonathan Pinkerton, Victoria Shaw, Charles Dorris, Rick Shipp, LeAnn Phelan, Tom Baldrica, John Elliott, Scott Hendricks, Gary Overton, Karen Byrd, Paul Barnabee and Ben Fowler were all there. Mayor Karl Dean and Nashville First Lady Anne Davis had just returned from a national mayors conference in Oklahoma City and were surprised to see that that metropolis is now billing itself as “Music City,” and citing Nashvillians such as Vince Gill and Kings of Leon as proof. How dare they?

By the way, the fans’ “tweets” shown on the big screens were almost universally banal. Most of them read, “CMA Fest Rocks!” or something like that. One said, “Nashville is so awesome.” Well, yes, actually, it is.