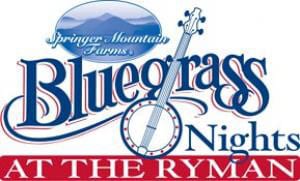 Springer Mountain Farms Bluegrass Nights at the Ryman returns to the Nashville stage where Bluegrass was born starting Thursday, June 24 and continuing each Thursday night through July 29. Vince Gill will kick off the prestigious series featuring the biggest names in the Bluegrass genre.  Following Gill in the series will be Grammy award winning artist Ricky Skaggs and Kentucky Thunder for the annual Red, White and Bluegrass night on July 1st. The Grascals and J.D. Crowe & The New South perform July 8th.  On Thursday, July 15th catch 2009 IBMA Entertainers of the Year, Dailey & Vincent with special guests The Quebe Sisters Band. The legendary Del McCoury Band with special guests Steep Canyon Rangers round out the series on July 29th.

The highlight of Springer Mountain Farms Bluegrass Nights at the Ryman this year is certain to be the special appearance of Bluegrass pioneer Earl Scruggs on July 22nd.

”Mr. Scruggs is the only remaining member of the ensemble referred to as the original bluegrass band and his appearance at the Ryman where he helped birth a new style of music is testament to his continuing influence and creativity,” commented Dan Hays, Executive Director, International Bluegrass Music Association.
Mr. Scruggs is long-credited with a special place in music history for a historic performance on the Ryman stage on December 8th, 1945.  On that winter night, a twenty-one year old Scruggs joined Bill Monroe on stage for the first time.  The definitive sound of bluegrass was born that night in large part to Scruggs’ innovative three-finger roll style of playing.

“2010 marks the 65th anniversary of Mr. Scrugg’s first performance on the Ryman stage with Bill Monroe,” said Ryman Auditorium General Manager, Sally Williams. “That historic night laid the foundation for the definitive sound of bluegrass for generations to come. We’re honored to welcome him back to the Ryman to be part of Bluegrass Nights at the Ryman,”

All shows begin at 7:30 p.m. and are preceded by 650 AM WSM’s Pickin’ on the Plaza featuring regional bluegrass bands from 6:00–6:45 PM. The free showcases take place just outside the main entrance on the plaza near the statue of Captain Tom G. Ryman. Tickets are on sale now through the Ryman box office, online at www.ryman.com or by calling 800-745-3000.  Ticket prices start at $26.00 per show and special passes for all 6 shows are only $135.00.  For more information visit www.ryman.com/bluegrass.