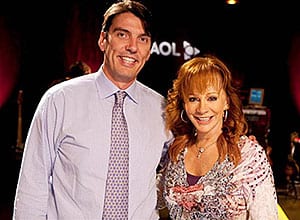 Reba recently taped her first appearance on AOL Sessions in New York City and it is set to premiere Sept. 4. She is pictured with AOL Chairman/CEO Tim Armstrong.

Reba McEntire’s first new solo studio album in six years—and her first for The Valory Music Co.—debuted at No. 1 today on the Billboard Top Country and Top 200 Albums charts. She sold almost 96,000 units the first week of release.

Keep On Loving You is her first solo studio album to reach the pinnacle of the all-genre Top 200 chart. Featuring the Top 10 smash “Strange,” the album is the highest debut from a female country artist for 2009.

With today’s news, Reba now holds the record as the female artist with the most No. 1 albums—11—on the Billboard Top Country Albums chart. She previously shared the title with Loretta Lynn with 10 albums.

The chart watchers at Valory also report this is the first time in history that three country albums in a row have topped the Billboard Top 200 Album chart. Most recently the No. 1 slot belonged to George Strait and Sugarland.